Supply Chain Visibility: Can You See Me Now? 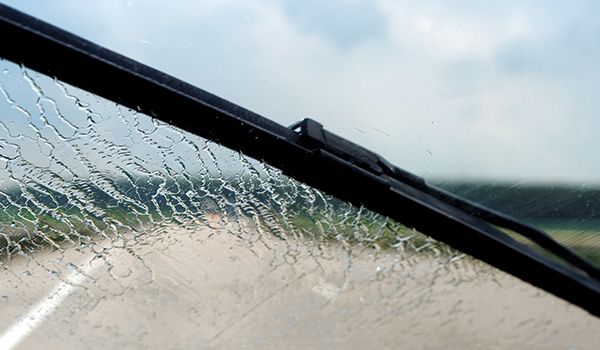 Using technology to gain a clear view into your supply chain can both wipe out costs and pour revenue to your bottom line.

In addition to visibility to products in transit, EMD wanted greater visibility to materials and products within its plants, some of which span more than five square kilometers (3.1 miles). Finally, EMD ships many of its products in returnable containers and needed to easily track them, both within its campuses and around the world, Grimm adds.

"This gave us insight about what our customers and forwarders are doing," Grimm says. For instance, EMD was able to tell if it took too long to pack some products, or if products were exposed to the sun for longer than they should have been.

In one case, EMD discovered the air conditioning in the truck wasn't working properly. An employee let the driver know the system needed repair. He was able to fix the system and save the products. "If we hadn't discovered this, we could have lost a complete truck of chemicals," Grimm says.

To be sure, such instances are rare—Grimm notes that problems occur on less than one percent of shipments—but they can be expensive. Just as important, the chemicals can become dangerous when not properly stored and transported.

EMD doesn't use Tive in all areas. Some chemicals it works with can't come into contact with the batteries used in the tracking devices. EMD's deployment of Tive is limited to areas and shipments where this isn't a concern.

As EMD's experience shows, supply chain professionals who know the location of each piece of inventory or material, whether in transit or within their facilities, and who can act on the data, can make more intelligent decisions. They can reduce safety stocks and cut costs. They also can cut out-of-stocks, boosting revenue. Visibility also facilitates the almost instantaneous delivery times many customers now expect.

Yet, true supply chain visibility remains more a goal than a reality for many organizations. Nearly two-thirds of more than 500 procurement leaders responding to the 2018 Deloitte Global Chief Procurement Officer Survey say they have limited or no visibility beyond their tier-one suppliers (see chart). 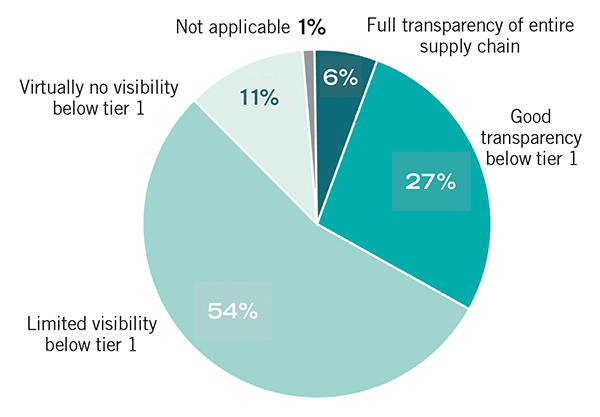 A surprising and somewhat worrying fi nding from Deloitte’s 2018 Global Chief Procurement Offi cers survey is that 65 percent of procurement leaders say they have limited or no visibility beyond their tier 1 suppliers. This has major implications for organizations across all industries, particularly for meeting regulatory and corporate social responsibility requirements and for identifying and mitigating supply chain risks. In addition, greater visibility lends itself to greater innovation and improved total cost of ownership. High performers are two-and-a-half times more likely than their peers to have full supply chain transparency

This is slowly changing. "Over the past five years, the ability to harness data, and do something meaningful with it, has grown exponentially," says Bill Kammerer, principal on supply chain visibility with Deloitte.

Among the technologies enabling supply chain visibility are improvements in radio frequency identification (RFID), new cloud-based software solutions, Internet of Things (IoT), and data analytics. While not all are new technologies, many have advanced even as their prices have dropped. Here's a look at those improvements.

Radio frequency identification (RFID) is one technology that has been around a while, and yet continues to improve and is finding applications within several retail sectors, including apparel, footwear, and cosmetics. RFID can provide the supply chain visibility that can reduce apparel out-of-stocks. In addition, today's RFID technology can read 600 tags per second from several feet away.

The inventory accuracy in stores using manual inventory counting systems tends to be about 55 to 75 percent, due to "cascading error," says Dean Frew, chief technology officer and senior vice president of RFID solutions, with SML Group, an RFID developer. That is, inventory mistakes at the factory and distribution center are compounded as products move through the supply chain. In contrast, RFID inventory counts can hit 98-percent accuracy.

Out-of-stocks can drop, even as sales improve. In a typical RFID implementation, sales increase between 2 and 9 percent, and the retailer can take between 5 and 12 percent of its inventory out of the supply chain, Frew says.

One word of caution: an RFID application can be disruptive, Frew says. It may integrate with four or five other software solutions, including retail management and ERP systems, and a product catalog. And, rather than once per year, stores might do a cycle count every week.

The Internet of Things (IoT)—everyday objects that are connected to the internet and able to identify themselves to other devices—also can boost supply chain visibility.

Kammerer provides an example: a distributor of fresh produce affixes to a bag of lettuce a sensor that pulls information on its condition. The sensor lets the distributor know that fluctuations in temperature and moisture within the delivery truck cut the time period the lettuce will remain fresh.

Armed with this information, the distributor may decide that it will keep the lettuce in California, where it was grown, rather than transporting it to the East Coast as planned. The distributor reduces the likelihood of price reductions on the lettuce to get it to sell before its updated expiration date, as well as its need for expediting and other more expensive transportation options.

Maersk and IBM are collaborating on a containerized shipping trade platform that will help manage and track tens of millions of shipping containers globally by digitizing the supply chain process from end to end. The goal is to reduce global trade barriers and increase efficiency across international supply chains. The platform is being built on an open technology stack and is underpinned by blockchain technology. When it launches, it will address two main capabilities: visibility and documentation changes.

As GPS (global positioning system) capabilities have advanced, and as software has moved to the cloud, asset-tracking systems can provide greater visibility, even as their costs have dropped.

Pan American Express Inc. (Panamex) is an asset-based carrier with about 750 trailers serving customers in North America. Panamex also operates a fleet of trucks from independent owner-operators and brokerage trucks.

Previously, the company used a manual system to track these assets. This "took a lot of time and required us to have a surplus of empty trailers at any given time," says Ric Guardado, owner and chief executive officer.

Four years ago, Panamex implemented FleetLocate, a cloud-based solution from Spireon, a vehicle intelligence company. With FleetLocate's GPS and software, Panamex can more easily locate its trailer pools and determine their status.

"The program helps us optimize trailer pools and saves time for our fleet managers and drivers," Guardado says. In addition, because the solution let Panamex better leverage the trailers it already had, the company avoided millions in new equipment purchases.

Another benefit: customers can log in to the dashboard and check the status of their deliveries; they no longer need to call Panamex. This saves time for both the customer and Panemex.

The promise of blockchain in the supply chain space appears great. In January 2018, IBM and Maersk announced a joint venture that would use blockchain technology to provide more efficient and secure methods for conducting global trade (see chart, page 57).

In a release, the two companies note that as "a distributed ledger technology, blockchain establishes a shared, immutable record of all the transactions that take place within a network and then enables permissioned parties access to trusted data in real time."

All supply chain professionals should monitor this initiative. "If successful, it could dramatically increase supply chain visibility," says Josh Green, chief executive officer with Panjiva, S&P Global Market Intelligence. "And no matter what, we all learn a lot from their efforts."

The benefits of greater supply chain visibility are so compelling, implementing the tools and technology that would provide them seems like a no-brainer. Several obstacles can get in the way, however.

One is the difficulty of engaging multiple parties. "You're looking left and right, at partners and customers," says Brian Higgins, principal in KPMG's Advisory Services practice, which is focused on strategy and operations management consulting. That's in addition to engaging employees. Gaining support from everyone for the changes required takes time and attention, including from management.

True supply chain visibility can require a multi-year effort, Higgins adds. Most organizations must balance multiple competing priorities, some of which—say, getting to a global or regional ERP system—also are mission critical.

In addition, a supply chain visibility initiative will be data intensive, Higgins says. The data, as well as its format and hierarchy, among other attributes, need to be scrubbed and accurate. Similarly, the system architecture needs to be on target, or the costs can easily get out of hand.

"There's no magic bullet," he adds.