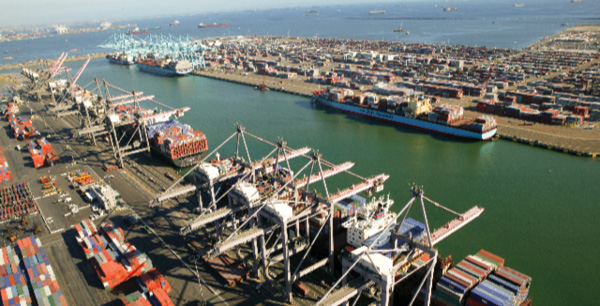 Protecting and retaining cargo market share in the face of the Panama Canal expansion, changing economic conditions, and intensifying competition is key to the Port of Los Angeles' future.

With the completion of the Panama Canal project just around the corner, conjecture about how the expansion will affect shipping patterns continues. East Coast ports and players are bullish. Elsewhere, opinions are more muted.

The Panama Canal is making a loud impact, however, on the Port of Los Angeles, which expects to invest $3 billion in infrastructure enhancements over the next decade. Work includes deepening access channels, expanding marine terminals, and improving traffic flow through street and bridge improvements in the harbor area.

"When shippers look at our facilities, they need to see we're top flight," explains Phillip Stanfield, spokesperson for the Port of Los Angeles. "The port is in the second year of a five-year $1.2-billion investment program, and is spending more than $1 million daily on infrastructure. These investments are in response to the Panama Canal, as well as competitive threats from Mexico, Canada, the Pacific Northwest, and the East Coast."

The port doesn't know how the Panama Canal will sway trade, nor will it speculate on percentages or numbers. Carrier rates are a key factor; so is speed to market. Los Angeles will always hold an advantage over East and Gulf Coast ports in that regard.

"The port's second-largest import is auto parts. It's critical those parts be delivered when expected so cars can be built," Stanfield tells Inbound Logistics. "When the Panama Canal widens, the port still beats the East Coast's speed by five or six days."

Amid capacity and asset utilization issues, steamship line schedule dependability has been trending downward. Los Angeles is still a direct line from Asia. Ports in the U.S. Pacific Northwest, Canada, and Mexico offer similar advantages. But what Los Angeles has is critical mass—and, increasingly, balance.

In 2010 and 2011, the port doubled its exports. Its Trade Connect program educates small businesses on how to export. Greater trade balance is attractive to carriers in all modes looking to utilize capacity efficiently, and eliminate costly deadheads.

Beyond that, the port's potential to quickly process larger ships is a major incentive. Much of the current and future investment is geared toward facilitating transshipment on and off port. Ocean carriers want to serve ports where they can deliver larger vessels. It's simply a matter of scale.

But one huge obstacle stands in the way. Years of manufacturing attrition created a generational talent gap. There's not enough skilled labor to accommodate new demand.

In fact, U.S. manufacturers may lose up to 11 percent of their earnings annually as a result of increased production costs stemming from a shortage of skilled workers, warns Out of Inventory: Skills Shortage Threatens Growth for U.S. Manufacturing, a recent study conducted by Accenture and The Manufacturing Institute.

Nearly 40 percent of the 300 U.S. manufacturing executives surveyed describe the shortage of qualified, skilled applicants as "severe," and 61 percent say it has been difficult to hire the skilled people they need. In addition, more than 50 percent of respondents plan to increase production by at least five percent in the next five years.

Furthermore, when manufacturers are unable to fill roles, overtime, downtime, and cycle times increase; more materials are lost to scrap; and quality suffers. Yet quality has always differentiated U.S. manufacturing.

"The skills shortage facing U.S. manufacturers is apparent from this report, and its severity can be measured in dollars," says Matt Reilly, senior managing director, Accenture Strategy, North America.

"U.S. manufacturers' plans to increase production and grow manufacturing roles over the next five years are positive indicators, but are likely to exacerbate the problem," Reilly says.

"Given today's limited pool of relevant talent, companies may have to forget the notion of the perfect candidate," he adds. "Instead, they should look for more generalist skills in candidates, and develop them to match the specific work that needs to be done."

U.S. manufacturers may be risking up to 11 percent of earnings before interest, taxes, depreciation, and amortization annually as a result of a skilled workers shortage and increased production costs.

Source: Out of Inventory: Skills Shortage Threatens Growth for U.S. Manufacturing, Accenture and The Manufacturing Institute

Speculation about using drones for delivery purposes continues to buzz with abandon. But until the Federal Aviation Administration has its say, that's merely a flight of fancy. Still, drones are popping up not just in airspace, but in the freight transportation space as well.

For example, Montreal-based Fednav, a dry-bulk transportation company, has been using unmanned air vehicles (UAVs) for ice reconnaissance on commercial sailings. Recently, the Umiak I, a Fednav icebreaker, used a variety of video-equipped drones to scout ahead of the vessel in the frozen waters off the Labrador Coast. The surveillance provided the captain and officers with detailed, real-time visual information on local ice conditions.

Enfotec, a Fednav subsidiary, provides ice imagery and analysis to vessels operating in difficult conditions. With recent advances in the quality of information derived from satellite and radar images, and conventional ice charts, this new method of ice detection immediately captures subtle ice features such as ridges, leads, and fractures. The UAVs deliver critical, high-quality, short-range visual observations allowing navigators to see beyond the normal horizon for strategic navigation.

"UAVs are proving beneficial in identifying many ice features that should be avoided ahead of the vessel, as well as identifying open water leads to improve voyage efficiency," says Thomas Paterson, senior vice president, Fednav. "In addition, the deployment of drones fit with top-quality cameras gives the ice navigator another useful aid when making important decisions while transiting heavy ice regimes, and, in turn, improved safe navigation."

Some familiar names top Gartner's 10th-annual list of the best supply chains. The top five organizations in 2014 include four that led the list last year—Apple, McDonald's, Amazon, and Unilever—plus another familiar leader, Procter & Gamble. Two new companies joined the Top 25 this year: Seagate Technology (No. 20) appears for the first time, and Kimberly-Clark (No. 21) re-emerges after a one-year hiatus.

Apple takes the top slot for the seventh year running, continuing to outpace all other companies by a wide margin on the composite of financial and opinion measures.

"Every year we identify the companies that best exemplify the demand-driven ideal for today's supply chain and document their best practices, which can help all companies move closer to their demand-driven goals," explains the Stamford, Conn.-based consultancy.