Of 440 people surveyed in the UPS 2013 Pain in the (Supply) Chain report, 63 percent say regulatory compliance is now a "top supply chain challenge," with 47 percent of decision-makers citing the issue as a major barrier to global expansion.

The 2013 survey also "probed more deeply than before" into successful strategies executives have employed to address these challenges, says Scott Szwast, marketing director, healthcare, at UPS.

When it comes to regulatory compliance, 49 percent of those who successfully addressed this issue invested in technologies such as bar coding and serialization—with 42 percent also increasing their roster of regulatory staff, and 41 percent hiring regulatory consultants.

The survey also reports that 56 percent of decision-makers use logistics and distribution partnerships to manage cost, while 53 percent invest in IT, and 50 percent perform supply chain optimization analysis.

UPS also quizzed companies about their plans to increase efficiencies and improve competitiveness over the next five years—and found that 84 percent will invest in new technologies, 78 percent will tap new global markets, and 70 percent plan to increase their use of new distribution channels and models.

"There is a sense of urgency to create positive, meaningful change in the industry as healthcare executives focus on implementing transformative supply chain strategies to meet larger business goals while addressing challenges related to regulatory changes, cost pressures, and growing issues around product security and integrity," says Szwast.

As part of a long-term plan to reduce operating costs, GM is moving stamping facilities closer to points of production. The automaker recently opened a new $200-million parts plant adjacent to its Arlington, Texas, manufacturing complex.

The new GM facility produces large metal parts such as doors, hoods, and side panels for the next generation of full-size SUVs .

Previously, the Arlington plant received stampings from several GM locations, some more than 1,000 miles away. The new stamping facility will save about $40 million in logistics costs annually.

"The site is part of a growing trend in the automotive industry to locate stamping operations closer to assembly plants to improve quality and reduce costs," says GM spokesperson Donna McLallen. "Arlington is the 10th contiguous stamping plant to come on line in GM's global operations in the past five years.

"Many of GM's Tier 1 suppliers are located close to assembly facilities," she adds. "For example, seats are commonly built and shipped in line sequence to the assembly plants from nearby facilities. GM is assessing future supplier localization strategies to achieve the best total enterprise cost."

While it has not changed sourcing strategies, GM expects stamping operations located feet—rather than hundreds of miles—from the assembly process will improve communication and problem-solving.

Absent a national transportation policy, states have been forced to go it alone as they draft infrastructure blueprints for the future. The Moving Ahead for Progress in the 21st Century Act transportation bill that President Obama signed into law in July 2012 provides an impetus and mandate for states to explore appropriate funding mechanisms. The hope is that individual successes will eventually coalesce, and help build a framework for others to follow.

Ohio is among a handful of states leading by example. In January 2013, Governor John Kasich announced plans to issue $1.5 billion in new bonds through the Ohio Turnpike and Infrastructure Commission to fund transportation projects in northern Ohio.

That strategy is already paying dividends. Kasich recently announced that the state would invest $120 million to repair and replace more than 200 county- and city-owned bridges over the next three years. Work is expected to begin on the first 40 bridges in 2014. Weighing factors such as safety and importance to local job creation efforts, the Ohio Department of Transportation (ODOT) will work with local officials to identify the remaining bridges to repair or replace in the following years.

"When we took office, Ohio faced not only an $8-billion shortfall in its general budget, but also a $1.6-billion shortfall in its highway budget," Kasich says. "ODOT tightened its own belt and freed up more than $600 million, then Ohio leveraged the turnpike to generate an additional $1.5 billion, which grows to $3 billion when paired with federal and local funds.

"That innovative thinking, and careful resource management, is why we can implement this $120-million program to help counties and cities meet their bridge needs," he adds. "In the past, ODOT hasn't helped counties or cities address these kinds of needs, but we're in a strong enough position now that we can and will."

High-profile bridge failures in Minnesota and Washington have become a rallying cry for government action. In 2012, the Federal Highway Commission reported that 11 percent of the nation's 607,000 bridges were considered "structurally deficient." Ohio has 44,000 bridges—the second-highest number in the nation behind Texas.

Collaboration—not cost—is the key to sustained procurement value, according to a recent survey conducted by events management company Consero. Sixty-seven percent of procurement decision-makers say their departments are more focused on building collaborative relationships with suppliers than obtaining lowest costs.

The Bethesda, Md., company's Fall 2013 Procurement & Strategic Sourcing Data Survey underscores the changing tenor of procurement, as companies recognize they have more to gain by partnering with suppliers rather than relying on traditional competitive bidding strategies. Finding continuous cost savings while improving service and innovation requires a more personal approach.

"Relying on competitive pressure restricts the sources of potential value to those things individual suppliers can do on their own (while also often discouraging supplier investments), whereas collaboration expands the potential to create value as customers and their suppliers work together," according to Consero.

To point, 80 percent of respondents indicate they are using influence to build trusted advisor relationships in lieu of enforcing compliance.

"By building trusted advisor relationships with the business, procurement becomes much better positioned to identify and pursue value-enhancing collaboration with suppliers," the report explains. "As procurement then delivers greater value to the business, they create a virtuous cycle, extending the ongoing transformation of the function."

Intermodal transport is shifting into high gear as shippers explore transportation alternatives in hopes of allaying capacity shortages and further reducing costs. That domestic growth is beginning to outpace international volume proves shippers, intermodal marketing companies, and rail carriers are making the jump to rail solutions beyond the port.

Total intermodal traffic grew in the third quarter of 2013 by 4.7 percent, year-over-year, attributable to gains across the board, according to IANA. Domestic container volume posted a year-over-year increase of 9.4 percent, and combined with a 1.2-percent boost in intermodal trailer volume for the same period. All domestic equipment experienced 7.6-percent year-over-year gains.

Also contributing to the increase in total intermodal traffic was a slight uptick in international volume, which posted a Q3 2013 gain of two percent over 2012 numbers. If jobs, consumer spending, and/or the broader economy accelerate, a slow but steady growth trend is likely for the international market. 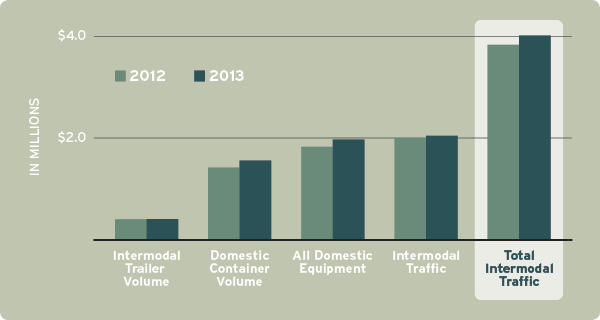