Railroads and shippers continue to debate the pros and cons of competitive switching, which proposes that certain captive shippers located in terminal areas be granted access to a competing railroad if there is a working interchange within a reasonable distance.

Competitive Switching: Between a Rock and a Railroad

Competitive switching—a directive that would require railroads to switch a customer's freight to a competitor's line within a reasonable distance—has been a "third rail" conversation among captive shippers and railroads ever since the threat of re-regulation started ringing through Congressional hallways. More pressing safety and security concerns were overshadowing the issue, until now.

Class I railroads are once again circling the wagons against another lobby from shippers and legislators in the aftermath of 2013's winter rail service meltdown in the upper Midwest. U.S. Senators Tammy Baldwin (D-Wis.) and Al Franken (D-Minn.) have joined forces with David Vitter (R-La.) to push the Surface Transportation Board (STB) into action.

BNSF's well-publicized capacity logjam in winter 2013 stranded agriculture trains for weeks on end. Shippers were missing boats as a consequence. The railroad blamed it on higher-yield bumper crops and harsh weather that handicapped operations.

But some shippers are skeptical, claiming those service delays had as much to do with booming Bakken oil business as it did Mother Nature's caprice. "The railroads have done a heck of a job supplying refineries, but shippers that don't earn them as much money—notably intermodal and agriculture—are taking the hit," Terry Whiteside, chairman of captive shipper lobby the Alliance for Rail Competition (ARC), told Inbound Logistics in February 2014.

The issue is rail-to-rail competition. Four Class I railroads with regional authorities (Union Pacific—Northern Plains; BNSF—West; CSX—Northeast; and Norfolk Southern—Southeast) control 95 percent of the business in the United States. Shippers and ARC are lobbying legislators and the STB to enforce competitive switching.

"When the Staggers Act deregulated the rail industry in 1980, Congress was telling the Interstate Commerce Commission (ICC) to stop railroad bankruptcies," explains Whiteside. "The ICC's mandate was to get carriers out of insolvency, and protect captive shippers that were formed by concentrating rail power."

The ICC took care of the insolvency problem and allowed market consolidation to follow at pace. But it never followed through on protecting captive shippers.

"When Congress started looking at the situation again, it found whole regions, states, and industries that were completely captive," Whiteside adds. "That wasn't the vision in 1980. So we began working with Congress and the STB to develop methodologies to mitigate this captivity."

Shippers and railroads agree on one thing—that railroads prefer the status quo.Ed Hamberger, president and CEO of the Association of American Railroads (AAR), has clearly outlined the industry's opposition to the proposed changes. Mandatory competitive switching would require multiple moves at additional costs—and only creates more opportunity for error. He calls it a "solution looking for a problem."

Hamberger reasserted this point at the 2013 RailTrends conference in New York City, citing the economic cost to the rail industry, and the impact of an additional 7.5 million carload switches annually on the network's velocity and efficiency.

"Every carload switch is a lost day, more time in the yard, more yard crews needed—and it's the yards that slow down the network," he said. For shippers, the writing is on the boxcar: Be careful what you wish for if delays are already a problem.

The greater concern is how this domestic impasse bubbles up and impacts U.S. export competitiveness. Consider a recent report commissioned by the U.S. Soybean Export Council and the Soy Transportation Coalition that compares the cost, transit time, and predictability of transporting soybeans from the United States, Brazil, and Argentina—the three primary producers of soybeans worldwide—to nine international destinations.

Despite longer distances to market, the U.S. soybean industry is consistently the most economical and reliable supplier to international customers because of its transportation network. On average, U.S. shipments arrive within three days of expected delivery dates, compared to seven days in Argentina, and more than two weeks variability in Brazil.

But that edge is dulling, in large part due to the U.S. railroads' inability to accommodate grain production for export. This is especially true in the hinterland, where shippers are held captive.

Historically, a journey from the upper Midwest to the Pacific Northwest took five to six days, with a five- to six-day return trip. In early 2014, the journey increased to eight days in both directions, according to the report. Transit times and reliability are eroding, thanks to bottlenecks in the network.

"What concerns me is that there is no short-term solution," says Whiteside. "Yes, you can put more locomotives on the track, but that just congests the system."

More disconcerting, U.S. transportation modes are inherently linked, each responding to capacity constraints on the other. Clogged hinterland rail capacity only pushes more freight to truck—which is already saturated.

Consequently, more shippers are looking at intermodal solutions to allay these concerns. But to swap modes, shippers and service providers need access to rail interchanges to shift product around. In the U.S. heartland, that remains a real problem.

Taking a page from the city's favorite son, Bob Dylan, Hibbing Taconite is singing the railroad blues. The mining company has begun trucking taconite pellets to Duluth-Superior Harbor thanks to less-than-superior rail service, according to theMinneapolis Star Tribune.

Hibbing Taconite plans to use 100 trucks, 24 hours a day, seven days a week during October and November in order to fulfill iron ore demand from its steel manufacturing customers throughout the Great Lakes region. The rush is on to move product before the Great Lakes freeze and the shipping season ends.

Shippers on the Hook as Trucking Costs Rise

Carriers are paying more per mile to keep drivers in their seats and freight moving down the road, confirm results from the American Transportation Research Institute's (ATRI) annual Operational Costs of Trucking study. Consequently, shippers will continue to ride shotgun while capacity drives the market.

Trucking companies operate in a competitive space with thin profit margins, so they have to pay specific attention to costs. Accordingly, the average marginal cost per mile in 2013 was $1.68 (see graph below), an increase from $1.63 in 2012.

After the recession and a sharp decline in fuel prices resulted in decreased industry costs between 2008 and 2009, costs steadily rose through 2010 and 2011, with a slight decline in 2012. The increase in average operating costs in 2013 is attributed to the ongoing driver shortage and the resulting wage increases by motor carriers to ensure retention of qualified drivers.

"Carriers have experienced significant increases in equipment and labor costs, as well as second-level line items such as tolls and healthcare benefits," explains Andrew Boyle, executive vice president of Boyle Transportation and a member of ATRI's Research Advisory Committee.

In terms of share, fuel costs and driver wages represent the majority of costs for trucking companies (64 percent in 2013, a slight decrease from 65 percent in 2012). Increasing freight demand, new government regulations, and an aging workforce will continue to intensify numerous line-item costs in trucking. 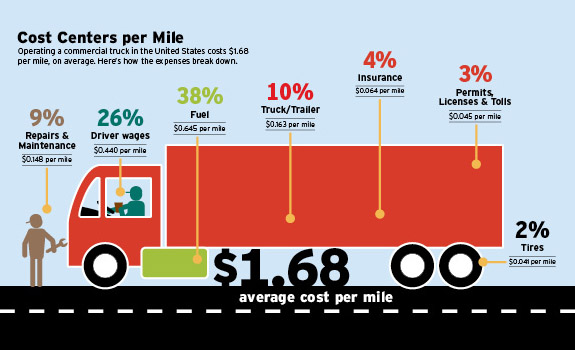