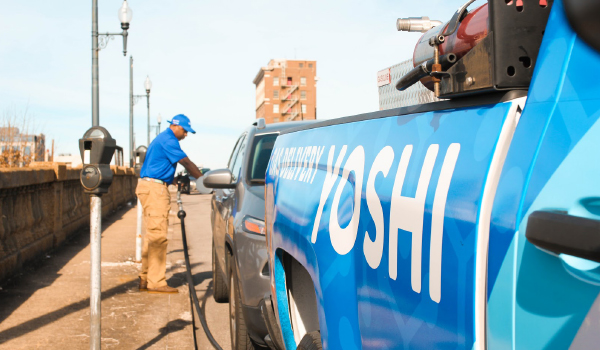 The Gas supply chain now extends to your car

Recently fueled with more than $15 million in funding and an operating space that has grown from three to 18 cities in less than one year, California-based startup Yoshi offers a monthly subscription service that delivers gas for your car directly to your residence. In addition to providing convenience without the hassle of driving to a standard gas station, the startup is benefiting from a dip in the number of gas stations around the United States.

The company charges a $16 monthly fee on top of the cost of the fuel. Yoshi sources the gas from ExxonMobil, a company backer.

It also offers services such as oil changes and wiper blade replacements, and customers earn gas discounts when they select add-on services. Customers can manage all services through Yoshi's app.

Drivers do not need to be present while Yoshi employees work on the vehicle, but the company asks customers to leave the fuel door ajar. Yoshi can also install a magnetic fuel vault that makes it possible to complete a fill-up when the fuel door is closed.

Despite safety concerns expressed by some fire departments, Yoshi states that its fuel transportation tanks, which often carry 1,000 gallons of gas, are certified by the U.S. Department of Transportation and adhere to local laws.

Yoshi estimates that customers can save up to $240 annually with this service.

Utilities, in particular, is an area that has shown a steady uptick in expenses related to energy transmission products and technology over the past decade.

Federal Energy Regulatory Commission reports offer insight into the spending habits of the major utilities companies that account for more than two-thirds of the electric grid load. These companies have been focusing on replacing and upgrading station equipment, fixtures, poles, and other devices, as well as building new stations.

The utility companies committed about $21 billion in capital spending to these areas in 2016 alone, according to the report.

The lion's share of this spending, according to the U.S. Energy Information Administration (EIA), was in the area of transmission infrastructure, followed by maintenance and operational costs such as operating the transmission grid and maintaining power lines.

Aging infrastructure will likely impact the future spending habits of utilities companies, as will efforts to improve compliance and security standards.

The EIA report also suggests that integrating renewable energy and natural gas will also play a role in future budgets.