Alaska: Logistics at the Global Crossroads 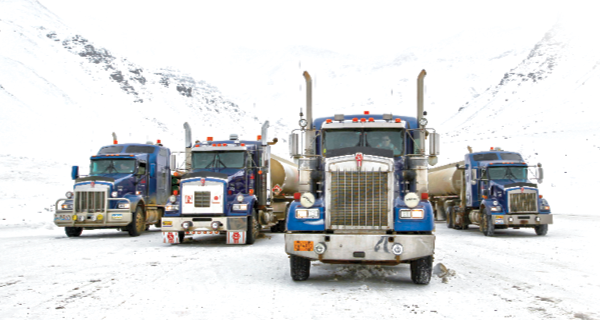 Shipments moving to, from, and through Alaska connect the state’s businesses and residents to the rest of the world.

If more people owned globes than flat maps, Alaska might be an even busier hub for global commerce than it is now. The shortest flight path between the United States and Asia stretches over Alaska, and Asia-bound steamships typically pass near Alaska's Aleutian Islands. Airfreight shipments from Anchorage can reach 90 percent of the industrialized world within 9.5 hours. And Anchorage International Airport has a special exception from U.S. trade laws that allows foreign airlines to transfer cargo between planes on the tarmac.

But perhaps because flat maps isolate Alaska way up at the top, many people think of the state as located well outside normal trade routes—so the 49th state retains a lot of untapped potential.

"Alaska is a unique place for logistics," says Dr. Darren Prokop, professor and chair of the Department of Logistics at the University of Alaska-Anchorage. "It's both a frontier and a global crossroads."

Specialized Services for a Unique Environment

Alaska distinguishes itself from the lower 48 states by its abundance of natural resources—crude oil, natural gas, seafood—as well as breathtaking mountain ranges and vast acres of unspoiled land.

It also presents challenges: a small but widely dispersed population, many in locales reachable only by water or air; highly rugged terrain in much of the state; extreme weather; and limited rail and road infrastructure.

Only 31 percent of Alaska's roads are paved. Central Alaska is where the roads are, but they don't reach southeast Alaska—which typically requires barge transport—or rural Alaska, where barge can reach the outskirts, but air is required everywhere else.

Aware of All the Options

Those challenges require a special breed of logistics provider to successfully move cargo within, into, and out of the state. They must offer multiple transportation modes to reach all destinations. Alaska's logistics providers must possess both the heavy equipment and know-how to move giant oil-drilling equipment to the northernmost reaches of Prudhoe Bay, and refrigerated transport to handle sensitive nursery plants, produce, and other temperature-controlled items.

"Logistics providers must be aware of all the options to get product into and around the state—from steamship to barge, highway, and air," says Paul Grimaldi, president of Lynden Transport, the trucking arm of the Lynden Incorporated family of transportation and logistics companies. "They all come into play when you serve the whole state."

Alaska's logistics providers must also be prepared to handle shipments differently than other U.S. providers. In Alaska, cargo such as building supplies, produce, and food products that would be trucked in other locations often requires air or barge transport—which, because of the weather, is only an option part of the year in some areas.

In addition, logistics in Alaska requires extra equipment, which must often be specialized for rugged conditions or specific needs, such as hauling oil-drilling equipment. Lynden, for example, operates flatbeds and stretch decks, and moves modules for oil rigs, pipes, and raw materials such as mud.

"It's very capital-intensive to serve Alaska, requiring carriers to offer more equipment than traditional carriers from the lower 48 who only move from Point A to Point B," says Grimaldi.

"We could have one trailer on a ship, and others in Anchorage and Seattle—all to service one company," he continues. "We've got to keep the supply chain moving."

Shippers outside the state may not fully grasp the magnitude of the challenges. Alaskan logistics providers often field questions from puzzled non-natives wondering whether they need a passport to visit Alaska from the lower 48 states, or whether carriers offer express over-the-road service from Seattle to Anchorage—which may look short on the map, but is a 2,358-mile journey.

Supporting shippers doing business in Alaska also means counseling them on how to ensure safe transport of their goods. One Carlile customer was surprised to learn that interstate highways in Alaska are not required to be constructed to interstate highway standards that apply in the continental United States.

Many Alaskan highways are rural, two-lane, undivided thoroughfares—sometimes with steep grades, and not always paved. These conditions mean "you have to package shipments well if they're going to remote areas," says Linda Leary, president of Carlile Transportation Systems.

All these challenges make Alaska a costly place to move cargo, so it's even more important that service providers help shippers optimize their loads and networks.

Lynden Transport, for example, offers dynamic routing so "shippers pay for the speed they need," says Grimaldi. As an asset-based carrier, the company operates multiple modes to get shipments where they need to go when they need to get there.

These innovations include seeking ways to minimize handling, avoid damages, and improve delivery to customers.

Every shipper wants more visibility of shipments in transit, especially for perishable cargo such as seafood. Lynden uses onboard computers in its trucks to provide this visibility. "We landmark every shipper with a latitude and longitude," says Grimaldi. "Our route optimization software uses GPS locations to optimize routes, and allows shippers to track shipments in transit."

Rising to the Challenge

Shipment visibility hasn't always been this easy. When global positioning systems came into vogue, the networks' satellites couldn't reach some Alaska locations due to the curvature of the earth; special satellites were launched just to cover the state's northern reaches. Today, the state is similarly challenged in cellular coverage.

Driver issues also impact Alaska in unique ways. In addition to a population of fewer than one million from which to recruit drivers, increasing Hours of Service restrictions have particular implications for the state. When there is no civilization or creature comforts along a 500-mile stretch of road, it can be difficult—and even dangerous—for drivers to stop for a mandated rest period.

Extreme weather can also create challenges in Alaska, particularly on its north slope. But the state takes pride in its flexibility and determination to find solutions.

One shining example is the Juneau Airport Wind System (JAWS), an air turbulence system that alerts pilots about severe wind conditions at and around Juneau International Airport.

A heavily used approach takes aircraft through the 15-mile-long Gastineau Channel, which is flanked on both sides by mountain ranges that create moderate to severe turbulence. After several close calls, the Federal Aviation Administration (FAA) suspended certain flight paths, and some carriers stopped serving Juneau due to multiple cancelled flights.

Alaska Airlines—a subsidiary of Alaska Air Group, which serves Alaska, the continental United States, Hawaii, Canada, and Mexico—worked with the National Center for Atmospheric Research and the FAA for 18 years to develop JAWS. It was formally commissioned in July 2012, but data from JAWS has already enabled Alaska Airlines to operate at the airport for more than a decade with a flawless safety record, says Joe Samudovsky, director of cargo sales and marketing at Alaska Airlines' cargo arm, Alaska Air Cargo.

The JAWS equipment provides wind shear and turbulence data that can be analyzed to provide a go or no-go recommendation to pilots arriving and departing Juneau. The FAA is now considering the system for other airports.

For 13 days in January 2013, heavy fog grounded a significant number of planes in Seattle, but Alaska Airlines' pioneering use of autoland—a system that fully automates the landing phase of an aircraft's flight —with a Head-Up Guidance System enabled the carrier to continue its schedule. Such innovations helped Alaska Airlines earn 's designation for the past three years as the most on-time airline among North America's major airlines.

"Logistics providers must be aware of all the options to get product into and around the state—from steamship to barge, highway, and air." — Paul Grimaldi, President, Lynden Transport

"If a drilling rig is down, it can't pump oil, and that costs tens of thousands of dollars a day, so we rely on a carrier partner that is going to perform," he notes.

Alaska Air Cargo's problem-solving capability was tested recently when an oil rig went out of commission in Prudhoe Bay and needed a small—but vital—part to pump oil. The part's flight out of Houston was delayed by weather, which meant it would miss its connection to Alaska Air Cargo in Seattle by 20 minutes. But the carrier held the flight, and the part was transferred on the tarmac from one plane to the other.

Alaska's logistics providers must also be equipped to ship its rich, in-demand raw materials. One of Alaska's best-known exports is seafood. In addition to such mainstays as salmon and halibut, the state has recently seen greater interest in some of its lesser-known seafood. For example, China's growing middle class prizes Alaska's geoduck, considered the prime rib of clams—though its appearance and large size seem to turn off American palates.

Alaska Air Cargo is a vital link in connecting Alaska's fresh seafood to markets throughout North America and the rest of the world. Customers are particularly interested in tracking those shipments to ensure safe passage.

"Many seafood customers use temperature-controlled devices to ensure seafood shipments' freshness through the supply chain," says Samudovsky. "That is why Alaska Air Cargo partnered with the Alaska Seafood Marketing Institute and one of its seafood customers to develop a cold chain training program that all cargo employees are required to participate in. The program helps increase awareness for the safe and efficient handling of perishable seafood."

Sometimes it also means helping transport people. Alaska Airlines, for example, flies oil field workers to Prudhoe Bay while the spare parts for their next job are in the cargo hold on the same flight.

With a relatively small retail market, Alaskans have become big fans of e-commerce. But because not all e-commerce companies ship to Alaska, logistics providers have stepped in to help. As one example, Carlile recently introduced Package Express, a small package service through which consumers provide a Tacoma, Wash., address and Carlile handles transportation to Alaska.

Alaska's logistics infrastructure is well-tuned for moving raw materials out of the state for processing, bringing needed supplies in, and transporting people and goods across the state's vast 663,000 square miles of diverse terrain. But it's also prepared to handle more—if others recognized the state's potential.

"There aren't many value-added manufacturers in Alaska," explains Prokop. Even the crude oil is trucked south, refined, then brought back as gasoline.

"Manufacturers could leverage Anchorage," Prokop continues. Despite perceptions that the city is remote, its 9.5-hour flight time to most of the industrialized world makes the area better positioned than some people think.

The state's role in global commerce is expected to get a boost with the eventual opening of the Northwest Passage. As the polar ice cap recedes, the northern shipping route is expected to become navigable year-round. "Why use the Panama Canal or go around the Cape of South Africa when you can go through the Northwest Passage to Europe?" asks Prokop.

That development could mean considerable investment in infrastructure—such as ports and a road system—along Alaska's northern shores. In the meantime, logistics providers in the state continue to embrace the challenges of conquering immense, diverse terrain, and the vagaries of the weather, to keep vital goods moving into, out of, and within the state.

"We love the adventure of trying to figure out how to make a delivery happen," says Carlile's Leary. The company's drivers' exploits have been featured on the History Channel's program Ice Road Truckers.

That spirit pervades the logistics sector throughout Alaska, where employees feel responsible for the health, safety, and well-being of residents. Logistics providers serve as their lifeline to the rest of the world, particularly in rural locations.

"Alaska is highly dependent on logistics for success," says Prokop.