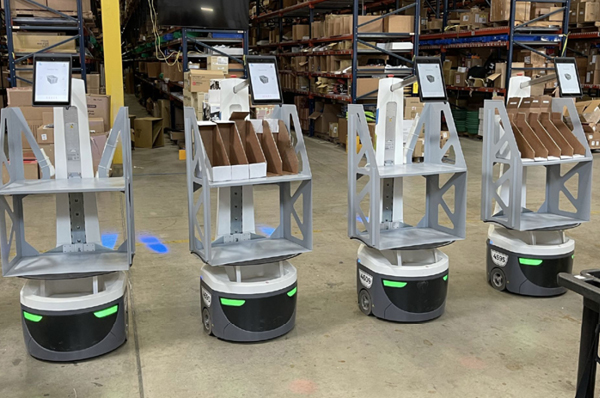 Productivity and employee job satisfaction are on the rise at Integrated Supply Network (ISN), an independent automotive tool and equipment specialist serving wholesalers and distributors throughout North America and Europe. Autonomous mobile robots (AMRs) have rapidly become useful additions at the ISN distribution centers where they've been deployed.

As an independent automotive tool and equipment specialist, Integrated Supply Network (ISN) serves wholesalers and distributors throughout North America and Europe. Headquartered in Lakeland, Florida, it operates 13 strategically located distribution centers—nine in the United States, three in Canada, and one in the UK—and has grown to include approximately 655 employees since being established in 1985.

Global technology group Körber provides a broad range of supply chain solutions, including robotics. Körber frequently collaborates with Locus Robotics, a robotic process automation company, and in doing so gives its WMS customers an opportunity to enhance their operations.

The size of a warehouse and its throughput can overwhelm and physically tax the average worker on any given day. That was certainly the case at ISN in late 2019 and early 2020.

"We faced challenges at our largest facility in the Atlanta area," says Theron Neese, chief supply chain officer at ISN. "We had congestion in the aisles, especially late in the day."

The 240,000-square-foot Buford, Georgia, facility has a 3:30 p.m. cut-off time with a need to get product out the door by 6 p.m. "It became a real crunch time," Neese says. "About all we could get through one of our hub facilities in a shift was 7,000 lines without taking drastic measures. So, we started to look around for some options."

In a fortuitous turn of events, Neese came across Locus Robotics, which happened to already have a good working relationship with Körber, ISN's warehouse management system (WMS) provider.

"Körber's partnership with Locus facilitated and expedited the process," Neese says. "Otherwise, we would have had to do all the WMS IT development in-house. Körber was able to help us because they'd already done a lot of that coding for other companies."

It took only 90 days to implement the solution at ISN's Atlanta location. Once autonomous mobile robots were deployed, picking quality, accuracy, and speed significantly improved—from 30 to 110 picks per hour, equating to a 266% productivity increase.

The AMRs have proven to be a game-changer for warehouse employees as well. "When we deploy Locus, we help companies untether the worker from the work itself," says John Santagate, vice president, robotics, for Körber Supply Chain Software. Pickers who once had to do a serpentine pick through a vast warehouse pushing an increasingly heavy cart can now pick to any robot they encounter.

Everything an employee needs information-wise is on a screen embedded in the robot. Once they fulfill one robot's order and place the pick in its tote, pickers can move on to another robot. Short walks between robots, cart free, reduce physical stress.

"Robots constantly move through the warehouse, going to wherever the merchandise is that needs to be picked," explains Karen Leavitt, chief marketing officer at Locus Robotics. By working collaboratively with humans, AMRs dramatically lower a company's cost per pick.

A six-year-old company, Locus Robotics contracts with about 200 fulfillment warehouse sites that run the gamut of retailers handling direct to consumer, store replenishment, or omnichannel fulfillment. Locus works with healthcare manufacturers fulfilling medical devices or pharmaceuticals, automotive part suppliers such as ISN, and others.

"The goal is to increase throughput in environments that have traditionally relied on human labor as their primary raw material," says Leavitt.

In addition to streamlining operations, ISN views AMRs as a way to address labor challenges. "We're experiencing high turnover just like everyone else in the industry right now," says Neese. "However, this approach does not replace anyone's job. It's just supplementing, which allows us to continue operations long term with fewer humans since it's currently very difficult to hire people."

Attrition rate aside, employees who continue to work at ISN have earned higher wages in the wake of AMR integration. "ISN gained labor-related savings because they didn't need as many people to fulfill the same amount of work," says Santagate. "However, they didn't let anybody go. They just moved people to other workflows.

"And to help improve employee retention, ISN took some of the savings they realized and increased warehouse worker wages," he adds.

It didn't take long for any of the parties involved—Körber, Locus, or ISN—to assess the positive impact robots would have on the automotive tool and equipment specialist and its distribution centers. "Doing the analytics, it was easy to determine AMRs would be a great fit," says Santagate. "Return on investment occurred within months."

Locus Robotics is a subscription-based business; customers pay a subscription fee for each robot. "As needs change, we can adapt quickly and add or subtract robots to handle their requirements," says Leavitt. Scalability is undeniable.

Robots are responsible for verifying the correct item has been picked, making sure everything is cross checked and gets to the right dispatch or packing station.

"We also constantly optimize the fulfillment routes," adds Leavitt. "When we team up with a company like Körber, which makes the WMS software, it's an active partnership on both sides."

It has been determined that robots suit five of ISN's nine U.S.-based distribution centers. "Square footage and volume determine where robots are best deployed," says Neese. Successful integration at the company's Atlanta area facility has been quickly followed by deployment at their Fresno warehouse.

At press time, ISN's Indianapolis warehouse was slated to be equipped by the end of 2021 or in early 2022 with New Jersey and Dallas soon to follow. "Our facilities in the UK and in Canada aren't on the list currently, but we do have them in the works," Neese says.

ISN has grown exponentially over the past few years. Small package shipments increased from 50% pre-pandemic to 80%, which explains fulfillment strains. Neese attributes ISN's 15 to 20% annual growth to its move to a two-hub strategy.

"We went to a West and East Coast hub strategy so all of our A, B, and D SKUs are stocked in those two facilities," he says.

Neese credits part of the business increase at the Atlanta facility to consolidating all slower moving products into those two hubs and not trying to stock everything everywhere.

Neese considers the 266% productivity increase at ISN's Atlanta location to be a good metric of all AMR integration has and can achieve. As pick rates soared, it led to a need for other jobs to be created in the warehouse.

"Improved throughput means we have to do things differently—for instance, there has been a change in how we build boxes and we've laid our manifest area out in a new way," he says. "We've moved people to other tasks. Any time you're able to increase human productivity, it's just fantastic.

"In today's labor environments, bots are a great solution," Neese says. "They're far easier to get up and running than many other solutions that require a lot of 'moving the furniture.' Bots are a much lighter implementation but provide the same or a similar impact.

"This productivity solution is something other companies need to take into consideration," Neese suggests.

Integrated Supply Network (ISN), an independent automotive tool and equipment specialist serving wholesalers and distributors throughout North America and Europe, was looking for a way to be more effective in their warehouse picking. They were experiencing both labor and peak hour challenges.

AMRs have enabled ISN to keep pace with the 15 to 20% annual growth the company has been experiencing over the past few years. Two of ISN's nine U.S. warehouse locations now use robots, with a third on the cusp and at least two others in line to join.

ISN is working to develop the coding for putaway so they can derive the benefit of bots when they're not being utilized during peak throughput hours.