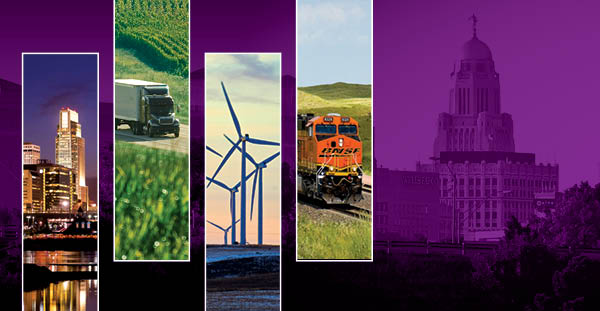 When it comes to logistics—or, for that matter, most areas of business life—Nebraska is in the driver's seat.

To attract manufacturing, distribution, and warehousing businesses, states must offer at least four types of benefits—affordable, skilled labor; attractive, available land; reliable, low-cost utilities; and accessible, economically competitive transportation. Nebraska has them all, according to Larry Johnson, president of the Nebraska Trucking Association.

In addition to these advantages, Nebraska offers a prime geographic location. The state is located in the "middle of everywhere," says Johnson, who notes that Interstate 80—which runs west from Omaha to the Wyoming state border—is the busiest east-west commercial transportation corridor between New York and San Francisco. Seven north-south state or federal highways intersect the region.

"Nebraska is the epicenter for traffic moving between Mexico and Canada," Johnson notes. "The number of Nebraska-based carriers and the state's geographic location combine to create a steady balance of truck freight moving to, from, and through Nebraska. This allows freight rates to remain steady, without the seasonal and cyclical highs and lows of more congested hubs that distribution and warehousing projects have been drawn to in the past."

For businesses located in Nebraska, accessibility is everything. "Geographically, Nebraska is center stage to both regional and national markets," says Rick Nelsen, economic development manager for the Nebraska Public Power District (NPPD), the state's largest electric utility, with chartered territory that includes all or parts of Nebraska's 93 counties.

"Interstate 80 offers 482 miles of quick access to everywhere in the nation," Nelsen says. "Through Nebraska's roadways, goods delivered by truck reach more than 26 percent of the U.S. population in just one day. Within two days, that percentage increases to more than 90 percent."

Nebraska offers plenty of truck capacity to make those trips. "More than 13,500 licensed motor carrier companies maintain their home offices in Nebraska," Johnson says. "These range from carriers operating one truck that the company president drives, to Werner Enterprises and Crete Carrier Corporation, which rank among the top 10 North American trucking companies."

Two of the nation's leading rail companies—BNSF Railway Company and Union Pacific Railroad—provide service to many Nebraska communities. Ten freight railroads operate more than 3,200 miles of track throughout the state, and no major city in the United States is more than five days by rail from Nebraska.

Among the supply chain specialists situated for success in Nebraska is TSL Companies, an integrated, value-added, full-service logistics organization founded in 1981. TSL serves all domestic North American markets with intermodal contracts encompassing the Class I railroads and a network of contracted for-hire trucking companies.

TSL's intermodal terminals in Omaha; Kansas City, Mo.; and Denver serve all the Plains states, making TSL the largest intermodal company between the Mississippi River and the Rocky Mountains in the upper 14 Plains states, according to Thomas Hastings, president of TSL Companies.

Getting Down to Business

Being in the right place is one thing. But if the right place doesn't offer an economic environment favorable to business, the advantage is lost. Helping forge a strong partnership between Nebraska's logistics sector and government is the Nebraska Logistics Council, which works in cooperation with the Nebraska Trucking Association and the state's Department of Economic Development.

The council focuses on promoting growth in the logistics sector, and works closely with prospective companies to model their logistics costs across all transportation modes, giving them an estimate of Nebraska's labor, land, utilities, and logistics cost advantages.

Nebraska distinguishes itself by the strength of its partnerships between workers and companies, and companies and government, says Robert Winter, Nebraska Trucking Association board member, and CEO and president of Lincoln-based warehousing company Distribution Inc.

"The Midwest offers a more stable workforce and economy than other parts of the country," says Winter. "This region didn't experience the economic downturn to the extent that other areas felt it."

"Nebraska's status as the country's only public power state provides significant advantage to businesses that choose to locate here," he says. "The primary goal of Nebraska's electric utilities is providing low-cost power, rather than shareholder profits.

"Public power also means Nebraska's utilities are financed, in part, through issuing and selling tax-exempt revenue bonds, resulting in lower interest rates on borrowed money," Nelsen adds. "The publicly elected board that serves as NPPD's decision- and rate-making body allows it to move more quickly than other utilities on key issues."

It comes down to making business work for everyone at all levels. "Workers in Nebraska possess a strong work ethic," says Leathers. "And the regulatory and government environment is very pro-business. That helps explain why the state's unemployment rate never rose above six percent during the recent recession."

An Emphasis on Growth

Because sitting still—even when that means sitting pretty—is not enough, Nebraska's leaders are intent on preparing tomorrow's workforce today.

"Nebraska maintains high-quality, respected public and private commercial driver's license (CDL) training programs to stay ahead of the demand for truck drivers," says Johnson. "Six CDL programs operate on university and community college campuses across the state—including one on the University of Nebraska at Kearney's campus in its Ag Transportation Safety Center.

"Diesel technician training programs exist on various community college campuses across the state," he adds. "Thanks to the growth of the Transportation, Distribution, Warehousing, and Logistics (TDWL) career path, all the diesel programs are currently filled and wait-listed."

The TDWL field is forecast as one of the top two industries in the state for business investment and job growth for the next 10 years, according to a study commissioned by the Nebraska Department of Labor and Economic Development, and conducted by Battelle, an Ohio-based global research and development organization.

Together, these assets create a powerful magnet for business. Incentives strengthen the attraction.

Leathers is optimistic about the U.S. logistics sector's growth prospects. And he believes Werner—and, by extension, Nebraska—will particularly reap the benefits.

"The U.S. retail industry reports its lowest inventory levels in history," he explains, noting that it is a smart economic decision for retailers to keep inventory levels low and move products quickly. "And, as a percentage of total job growth, logistics will be a leader."

Among the markets set to prosper from this growth are Nebraska's can-do business and logistics sectors. 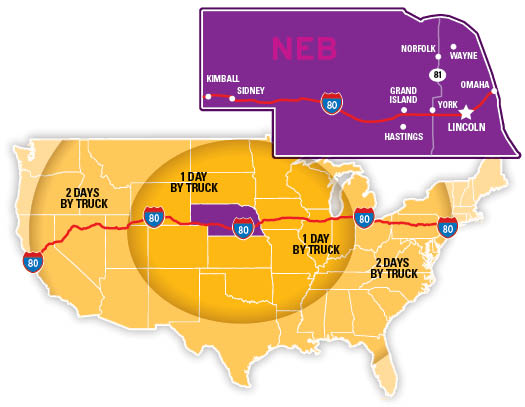