While Sen. John McCain seeks to repeal provisions of the Jones Act, U.S. flag carriers such as Crowley counter that the act protects U.S. jobs, the domestic shipbuilding industry, and national defense.

The senator's amendment seeks to repeal provisions set forth in the 1920 Jones Act, which requires vessels moving freight between U.S. ports be built in the United States. The measure was meant to protect domestic shipping interests and jobs from foreign encroachment.

"In Washington, sometimes up is down and offense is defense, but an amendment that seeks to eliminate highly skilled, steady middle-class jobs employing hundreds of thousands of our countrymen should never be called good for America," says Captain Don Marcus, president of the International Organization of Masters, Mates, and Pilots, a union representing sea captains and deck officers on U.S. flagged vessels.

The maritime industry argues that such a reversal would decimate the nation's shipping industry, eliminating as many as 400,000 U.S. jobs across 26 states, contributing to the closing of shipyards and related industries.

Beyond threats to the domestic economy, there's perceived risk that this amendment would also compromise national security by destabilizing the military's strategic sealift needs. The Jones Act ensures that the U.S. has a reliable source of domestically built ships and skilled American crews available for its military and humanitarian aid operations.

"Without the sealift capability and American maritime jobs provided by the Jones Act and the Maritime Security Program, the U.S. Armed Forces would be forced to rely on foreign-flag ships and crews with unknown loyalties to transport critical military cargo and personnel to overseas operations," says Marcus.

Companies are streamlining a broader range of business functions, including procurement and supply chain, according to Disrupt or Be Disrupted: The Impact of Digital Technologies on Global Business Services, a new study conducted by Accenture and HfS Research. The report examines where and how digital technologies—Software-as-a-Service (SaaS), big data and analytics, cloud and mobile—are being deployed to improve business operations and outcomes.

The key trends include:

Best-in-class procurement organizations are expanding their purview to drive company-wide innovation and top-line growth, according to a recent IBM study. Findings in the Chief Procurement Officer Study run counter to traditional perceptions where procurement predominantly serves as the gatekeeper to corporate spending.

In fact, top organizations are nearly twice as likely to introduce new innovations into the company, and 1.5 times more likely to influence senior leadership to enter a new market than their lower-performing counterparts.

More than 1,000 senior procurement leaders from $1 billion-plus companies in 41 countries contributed to the research, which was conducted by the IBM Institute of Business Value.

Where to House Your Warehouse

Chicago Consulting added two new criteria in 2015 that address the emergence of same-day delivery: first, the percentage of the population that is within 65 miles of the closest warehouse; and second, "the percentages of the population that are served in one, two, three, and four days by conventional carriers in which deliveries start the day after freight is picked up," explains Terry Harris, managing partner of the consulting firm.

The 10 Best Warehouse Networks were developed based on the lowest possible transit lead times to customers represented by the U.S. population (see chart below). For example, Vincenne, Ind., provides the lowest possible transit lead time for one warehouse. Any other location will increase transit time to the U.S. population. Similarly, putting three warehouses in any locations other than Boyertown, Pa., Jackson, Tenn., and Porterville, Calif., will cause the transit time to be longer than 1.29 days.

Networks with the lowest time-to-market 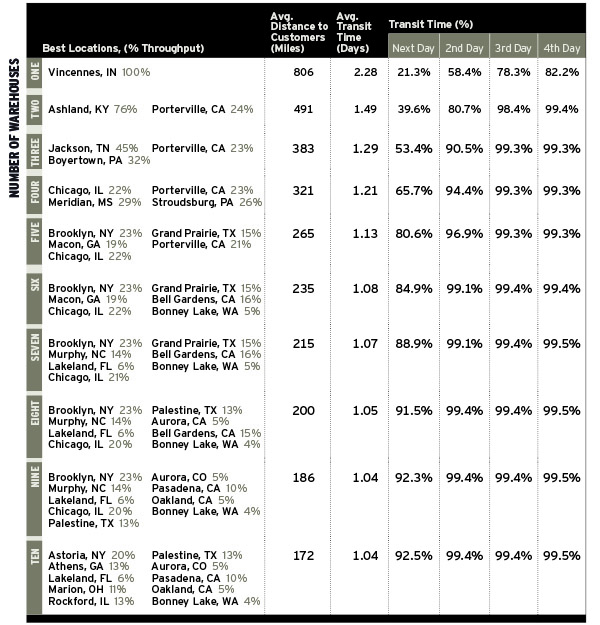 The percent throughput specifies the amount of material that would flow through these warehouses based on them serving the territories closest to them. The same-day statistic represents the population within 65 miles of any warehouse.

The transit time percentage statistics represent the amount of the population that is within one, two, three, or four days of the closest warehouse.

Time-to-market is not the only criterion for locating warehouses, according to Harris. Other factors include: