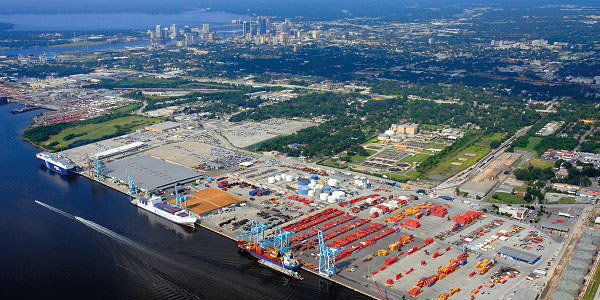 Among states that are likely to benefit the most from the Panama Canal's expansion, Florida has been very proactive investing in infrastructure improvements—notably expansions at the Port of Miami.

Now, Florida Inland Port has signed a memorandum of understanding (MOU) to create a strategic alliance with the Jacksonville Port Authority (JAXPORT). The agreement between one of Florida's largest seaports and the state's first rail-oriented, integrated logistics center helps pave the way for improved product flow through Florida and the U.S. Southeast.

Similar to recent agreements with the Port of Miami and the Port of Palm Beach, the MOU establishes a strategic alliance that will enhance the exchange of ideas, sharing of resources, and consolidation of efforts associated with Florida's initiative to establish itself as a major player in international trade and logistics. It pledges mutual support between the planned St. Lucie County logistics center and JAXPORT, and reinforces the importance of the inland port as Florida's first dedicated logistics hub.

"This type of alliance and shared initiative is the key to Florida's future competitive position in the world economy," says Paul Anderson, CEO, Jacksonville Port Authority. "Having our sophisticated port system supported by a dedicated central inland logistics center will help the ports work effectively to capture the flow of goods coming in through the expanded Panama Canal, Europe, and South America."

For many U.S. ports, total imports for 2011 are up compared to 2010. Seattle is one exception, with TEU imports down nearly 15 percent, due to significantly fewer imports from China, Japan, Hong Kong, and other Asian countries.

Plans for a new $25-million warehouse at the Port of Virginia's Portsmouth Marine Terminal are on hold and may have to be scrapped after engineers found the ground was not strong enough to handle heavy rolls of paper, port officials report.

The CrossGlobe Group, a Glen Allen-based logistics firm, announced in May 2011 that it planned to begin operating a paper and pulp import-export business out of a 500,000-square-foot warehouse to be built on the dock at Portsmouth Marine Terminal in 2012.

In a deal with Montreal-based paper company Kruger, the 3PL planned to bring approximately 150,000 tons of newsprint into the port annually. About 40,000 tons would go to publications, including The Virginian-Pilot, and 110,000 tons would be packed into containers for export to India and Brazil.

"The engineers came back and said we couldn't put a warehouse there that handles paper, because paper has to be stacked and the weight on the floor would cause the ground to rut," explains Joe Dorto, CEO of Virginia International Terminals, which operates the Virginia Port Authority's facilities.

The port authority could still green-light the project, but at double the cost—which is an unlikely option. Currently, the port has engineers looking at potential alternatives to make sure it can keep the business.

One solution would be to build a covered underpass connecting the pier to a warehouse built farther back from the water.

Shippers are about to enter the "no manufacturing" zone if U.S. officials have their way.

American exporters, importers, and multinational companies are urging a government panel to reconsider proposed rules changes they say would make it harder to do business through foreign trade zones in the United States, according to the United States Council for International Business (USCIB), which represents America's top global companies and signed the appeal along with several other groups.

The business groups have asked the Foreign Trade Zones Board (FTZB), an interagency body led by the Department of Commerce, to re-open for comment a portion of proposed rules change, put forward in December 2010, that would impose more costly and burdensome treatment of goods subject to anti-dumping duties or countervailing duties that move through such zones.

The existing policy allows FTZ users to import goods that would normally be subject to such duties, then manufacture and re-export finished goods without paying duties, as long as the finished products are not sold in the United States. The new proposal would make such duty-free importation more difficult by requiring a de facto trade remedy proceeding to determine whether the duty-free admission of these goods is in the public interest.

An appeals court recently ruled against the Port of Los Angeles in its attempt to restrict truckers that can haul goods in and out of its terminals as part of an ambitious anti-smog initiative.

The nation's largest port has tried to stop trucking companies from contracting with independent drivers as part of the Clean Truck Plan to replace thousands of tractors with cleaner-burning models to reduce diesel emissions.

The Port of Los Angeles reasons that even with subsidies to help pay for new rigs, which can cost more than $100,000, the independent truckers who make up the majority of drivers hauling cargo at the port can't afford to maintain them. The port argues that truck companies must be responsible for their drivers and for shouldering some of the program's costs.

The requirement "is tantamount to regulation," says the U.S. 9th Circuit Court of Appeals panel, and cannot be enforced. The ruling reverses a federal judge's decision in 2010 that the port should be allowed to take action to maintain its commercial operations "as any private landlord would."

While it recognizes the port's desire to improve trucker wages, benefits, and working conditions, the appeals court says it cannot "unilaterally insert itself into the contractual relationship between motor carriers and drivers."

The ruling protects trucking companies' rights to conduct their businesses. "By throwing out the ban, the court has ensured that competition, not government regulation, will establish motor carrier rates, routes, and services," says Bill Graves, president and CEO of the American Trucking Associations, which sued the port.

When it comes to parcel and freight shipping, companies are loyal to their transportation partners—and a little old-fashioned, according to Kewill's 2011 Best Practices Survey for Parcel Shipping and LTL/Freight Management report. Among its key findings: