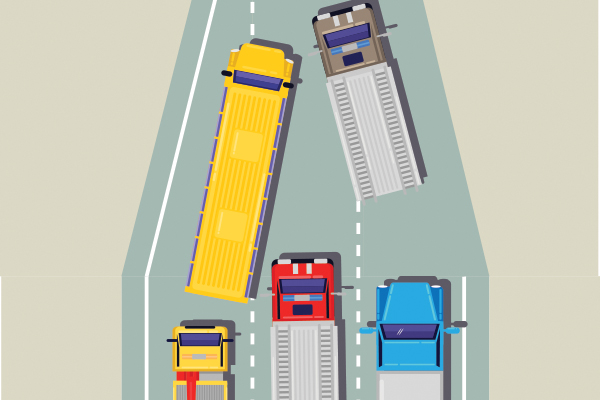 Companies sometimes get jammed up trying to move goods to customers' doorsteps efficiently, safely, and quickly. Here's a look at last-mile innovations that help break the deadlock.

When consumers place online orders for bestselling novels, tennis shoes, and T-shirts, those purchases may travel thousands of miles before they reach their destination. Of those, the last mile accounts for 53% of total shipping costs, Business Insider Intelligence reports.

"The final mile is the most expensive, most bottlenecked part of the supply chain for anything going direct to consumer," says Chris Bell, chief executive officer of Perch, an omnichannel company that acquires and operates fulfilled-by-Amazon (FBA) companies.

Why the bottleneck? Moving packages from vehicles to consumers' front doors requires a higher degree of human labor than other segments of the supply chain.

The pandemic and subsequent shift to online shopping, while a bright spot in a generally difficult financial year for many retailers and consumer brands, has magnified these challenges, says Khaled Naim, chief executive officer of Onfleet, a San Francisco-based firm that helps organizations streamline delivery operations.

Further exacerbating these challenges was the spike in business during the holiday season. E-commerce sales during the 2020 holiday season were expected to jump 33% from the previous year, reaching $189 billion, according to Adobe.

Carriers such as UPS and FedEx reportedly began to limit major retailers to previously agreed upon volumes. "The 2020 peak season was tough for retailers because the distribution networks were so overtapped," says Mike Daher, U.S. transportation leader with consulting firm Deloitte.

While the spike from the holiday season abates, the rise in e-commerce sales shows no signs of stopping. Growth in urban last-mile deliveries will increase by 78% by 2030, predicts the World Economic Forum.

These challenges are significant, but not insurmountable. At a broad level, retailers and others need "to marry the digital and physical universes," says Loudon Owen, chair and chief executive officer of DLT Labs, which develops distributed ledger solutions.

"Store operations have centuries of experience in placement, logistics, and procurement," he notes. That's not the case with online commerce.

Specific solutions include automating the processes that feed into the last mile, precisely planning transport loads, and leveraging technology. Microfulfillment centers (MFCs) and other storage capabilities located near population centers are additional options.

Start at the First Mile

Accelerating a supply chain's final mile should begin with the first mile, says Simone Ross, chief operating officer with supply chain software provider Setlog. Too often, the desire to cut time from the delivery cycle falls to the "firefighters" working on the last mile. "Look at the first mile and start the process there," Ross says.

This could mean automating the purchase order approval process and/or providing one solution through which all parties can quickly find information and updates on deviations from the plan as they occur.

"What has been lacking is a holistic view of supply chain management," Ross says. Absent this, "you don't see how much time is wasted."

The Home Depot, the Atlanta-based home improvement behemoth, has been investing in its supply chain and last-mile delivery strategies for several years. "Our supply chain is the foundation of delivering on our customers' changing expectations," says Kyle Dennis, vice president, supply chain development.

Among other steps, The Home Depot implemented mechanized floor loading in two-thirds of its facilities. This and other investments proved key when online sales jumped by about 80% in the third quarter of 2020, according to its third-quarter conference call.

Another worthwhile step is working with suppliers so they pack shipments in a way that's streamlined for the warehouse to which they're shipping. "Your time is often well spent doing these things, versus racing to be five minutes earlier while delivering packages," Ross says.

When delivery drivers arrive for work, the goal should be to enable them to get on the road as quickly as possible, rather than use them to spend hours sorting their loads. "Get the drivers driving," says Bell.

That requires pre-sorting loads to "a minute level," Bell says. One example: The individuals loading trucks place all packages headed to one neighborhood in the lower right corner to boost driver efficiency.

The power of logistics Providers

Many companies benefit by working with third-party logistics (3PL) providers, says Steve McIsaac, senior vice president of brokerage operations with NTG. In fact, 79% of 3PLs grew in 2020, according to a 3PL Central survey.

Solid logistics providers have the resources and partnerships that can help retailers and brands adapt to changes in consumer demand like those seen in 2020, McIsaac says.

Since 2011, investors have plowed about $18 billion into startups focused on the final mile, Daher says. Because completing the final mile requires not just software, but vast networks of vehicles and workers, disrupting it isn't easy, he adds.

That said, technology can help. Just ask Nicolas Bartoli, who co-founded Léon & George, a premium online plant store, about four years ago. He left his position in software engineering to leverage his passion for plants.

When the pandemic hit, demand picked up. A positive, yet it also caused challenges.

When delivering the plants, Léon & George strives "to provide the best experience to sophisticated clients" and make it easy for customers to incorporate greenery within their homes. However, communication about deliveries—say, to let customers know of a delay—was difficult, Bartoli says, making it challenging to meet expectations.

To address this, Bartoli and his team implemented the Onfleet platform, including its route optimization and dispatching capabilities. Bartoli's background in software engineering allowed him to handle much of the implementation. "It was nothing out of the ordinary," he says.

The Lowdown on DLT

Distributed ledger technology (DLT) also plays a role, Owen says. Even the simplest invoice can contain several hundred data points that need to be distributed among multiple parties, many of which use different information management systems. DLT enables secure information synchronization and sharing.

"The last mile isn't about wheels and machines, but about information that's trusted," Owen says. "That means it is clean, clear, and up to date."

Another concept that can help streamline the final mile is what's known as "integrated final miles," Bell says. This concept refers to sharing technology systems and solutions across a supply chain network to offer expedited delivery.

For instance, a national carrier may collaborate—often through crowdsourcing—with local, independent delivery drivers. This expands the pool of delivery drivers, while also allowing all parties access to information, sometimes through third-party apps.

Large national carriers are well designed to handle delivery routes that span about 500 miles or more, says Daniel Sokolovsky, chief executive officer of AxleHire, which provides same-day delivery services using a mix of crowdsourced drivers and third-party delivery companies. Because they use fewer hubs and spokes, regional carriers like AxleHire can often move packages more quickly over shorter distances, like the last mile.

Before COVID-19, each global fulfillment center of Printful, a print-on-demand company, focused on its specific region. So, U.S. fulfillment centers would focus on U.S. orders, says Artis Ivanovs, shipping IT project manager.

When business surged during the pandemic, Printful restructured its routing system to more evenly distribute orders among all its centers. "This helped each location to reach its full potential and balance overall order volume," Ivanovs says.

U.S.-bound orders were partially fulfilled in Europe and then shipped to the United States via freight forwarding, where final fulfillment occurred. Printful also fulfilled as many orders as it could in-house and then automatically routed surplus orders to its backup partners.

With these steps, Printful was able to maintain quality service without raising shipping rates, despite holiday surcharges, Ivanovs says.

In New York, about 10 million people located within about 20 miles of the Empire State Building spend more than $16 billion annually through e-commerce, Deloitte research shows. In this and other urban areas, MFCs and parcel lockers can help cut last-mile delivery times.

MFCs can quickly reach critical masses of consumers and can be particularly useful in last-mile grocery delivery, Bell says. For starters, many grocers can carve out space for MFCs within their grocery stores at a relatively modest cost. They can store the most commonly ordered items within the MFCs, speeding order fulfillment. And given that most grocery stores are close to population centers, delivery drivers can usually be at their first stops within minutes.

Some malls are struggling and have empty stores. And like grocery stores, many malls are close to population centers, cutting down on delivery times.

Parcel lockers or other community collection points are additional tools for managing last-mile deliveries. In one test by the Urban Freight Lab at the University of Washington, lockers reduced parcel delivery times to office buildings by more than 75%, when compared to traditional floor-to-floor deliveries.

By 2023, same-day delivery will be the norm for most online purchases, Deloitte predicts. As delivery times accelerate, technologies that aren't currently in wide use will likely gain ground. Drones show promise in remote and rural areas, while delivery robots might make sense within college and office campuses.

Autonomous vehicles "will impact over-the-road shipments sooner rather than later," Encinas says, given the long stretches of straight driving long-haul truckers do.

For many organizations, boosting the quality of their last-mile deliveries will require an ongoing commitment of time and money. However, few can afford to lose customers to competitors who better meet consumers' expectations.

The Work Of The Bulk

The usual last-mile challenges intensify when delivering heavy and bulky items. To start, many of these items take longer to deliver, especially when they require assembly, notes Chris Bell, CEO of Perch. Assembly times can range from minutes to hours, leading to variations in the time per delivery. Most of these deliveries have to occur within a set time frame and when the customer is home.

In addition, the delivery "can make or break the customer experience," Bell says. The delivery people can't simply leave the packages on customers' doorsteps and hustle to their next drop-off. Instead, they come into customers' homes and interact with them.

To address these challenges, start by determining what will make for the best customer experience, Bell says. When hiring, he and his team look for customer service experience first, and then for delivery experience.

Sophisticated routing and customer service solutions are critical, Bell says. He notes that these deliveries often require two delivery employees. Companies need to boost efficiency without impacting the customer experience. Software is key to accomplishing this.