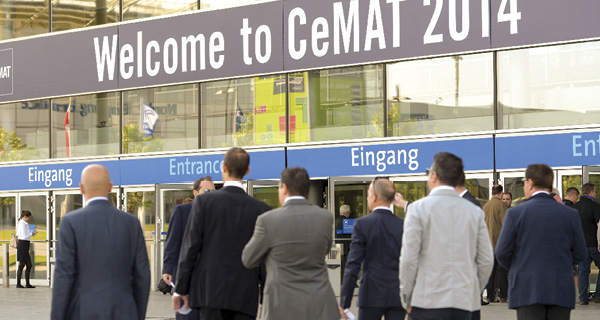 For more than 53,000 warehouse and manufacturing facility operators and equipment buyers, CeMAT 2014 was the ultimate shopping expedition. At the biennial event—held in Hannover, Germany, from May 19 to 23, 2014—1,025 exhibitors showed off 4,000 state-of-the-art warehousing, packaging, and inventory management solutions.

Offering a full solution makes purchasing decisions easier for warehouse operators. "As customer needs change, many companies want to buy materials handling equipment from a single source," said Kaulfuhs-Berger. "This enables them to streamline the process, and focus more on their core business."

Because same-day delivery for lift truck repair and maintenance parts is vital, Jungheinrich opened a spare parts center in Hamburg for customers in the European market. "The most expensive truck is a truck that doesn't work," said Kaulfuhs-Berger. "If equipment is broken, we need to quickly supply the parts needed to help the customer get back to business."

"With TSC, our technicians and backup staff are always online, and deal with up-to-the-minute information," explains Nick Duckworth, senior vice president, services, TMHE. "It means a technician can work on any truck, anywhere, and be fully informed and supported with, for example, truck history data."

Efficiency and convenience that support productivity head every warehouse operator's wishlist, and CeMAT 2014 attendees discovered a wealth of products and services to put them on the path to success.

SingPost maintains regional operations in 13 countries, with access to a global postal network of more than 220 countries and territories. The courier is well positioned to provide end-to-end e-commerce solutions such as warehousing, delivery, and returns management. Alibaba is the largest online and mobile commerce company in the world in terms of 2013 gross merchandise volume.

The strategic alliance also taps into other e-commerce opportunities in Southeast Asia by boosting access to SingPost's global logistics capabilities, infrastructure, and delivery networks, as well as end-to-end solutions for Alibaba customers and merchants. The partnership leverages core competencies from both companies to advance the e-commerce ecosystem and create logistics solutions for international e-commerce. It also creates a new growth market to help SingPost balance a declining domestic postal business.

While the European Union reconsiders some of its progressive green mandates, some areas are increasing environmental regulations.

In Paris, for example, officials recently proposed reducing the speed limit within the city to 19 miles per hour to curb pollution emissions and traffic accidents. The plan is already operational in some areas, reports French daily newspaper Le Parisien. Major roadways in and out of the city would be exempt from the new law.

While other European cities have entertained similar speed limits, Paris would be one of the largest to implement such a system.

Reducing speed limits cuts fuel consumption and emissions as much as 12 to 18 percent in certain simulations, suggests European Environment Agency research, while more realistic scenarios indicate two- to three-percent savings. But these findings are applied to higher speed limits than those proposed for Paris. It remains to be seen how these new regulations could impact the city's congestion and freight flows.

Brazil is one of the few nations that the United States exports more goods to than it imports from. In the first quarter of 2014, the U.S./Brazil trade balance had more than a $4.2-billion surplus in exports over imports.

Latin America was the world's fastest growing software market in 2013, and that trend is projected to continue, according to market intelligence firm IDC.

Despite this explosive growth, Latin America remains the smallest market for software purchases. Revenues for 2013 were $13.5 billion, accounting for just 3.7 percent of the global share. The current weakness of Latin American currencies against the U.S. dollar may affect the region's 2014 software growth in dollar terms, projects IDC.

Latin American markets are also gearing up when it comes to big data, with revenues expected to hit $871 million in 2014 and to continue growing exponentially, reaching $6.6 billion in 2018.

Canadian Shippers On Board With New Rail Regs

Following the 2013 Lac-Mégantic crude train derailment in Ottawa, Canada's railroad industry has come under the microscope. In April 2014, Transport Minister Lisa Raitt banned 5,000 of the most dangerous DOT-111 tankers from carrying flammable liquids on Canada's rail lines. The remaining tens of thousands of DOT-111 cars built before 2011 must be removed from service by 2017.

Rail shippers have been compliant with the new rules since their implementation—which is a good thing, given Canada's energy renaissance.

Crude oil exports by rail hit a record high of 160,000 barrels per day in the first quarter of 2014, according to Canada's National Energy Board—a 50-percent uptick from the same period in 2013.

The crude-by-rail boom has been gathering pace over the past two years, as producers seek alternatives to congested export pipelines that leave crude bottlenecked in the oil-rich province of Alberta, which ultimately impacts pricing.

As Africa's trade competitiveness continues to mature, its leading economy is looking to create a national shipping line. Nigeria recently made waves by asserting its need to resurrect the defunct Nigerian National Shipping Line (NNSL), which went bankrupt in the mid 1990s because of poor management.

After several starts and stops to reinstate a national carrier, Nigeria's government has proposed partnering with the country's private sector to avoid past pitfalls—welcome news to shippers who feel they are incurring extra costs because of this void.

Nigerian President Goodluck Jonathan has tasked the Nigerian Maritime Administration and Safety Agency (NIMASA) with ensuring that a national carrier is brought back during his administration.

"When the NNSL was liquidated, it was because it was managed by government. So, in the next six months, we will work with the private sector to get our shipping line back," says Ziakede Patrick Akpobolokemi, director general of NIMASA.

China's growing appetite for consumables has been well documented. Where the country was once the leading location for offshore manufacturing, it's now the target for entrepreneurial sellers looking to tap the world's largest middle class. Consequently, food exports into China are becoming a profitable enterprise.

A recent Bloomberg News report confirms this trend. China's per-capita income is expected to double by 2020. More telling, its urban middle class is projected to grow to more than 75 percent of the total population by 2022, compared to four percent in 2000, according to a McKinsey & Co. report.

Finland's biggest airline, Finnair, expects to double shipments of salmon to China and Japan by 2020. Fish is trucked in from Norway, which doesn't have direct flights to Japan or China. It is then flown to Asia.

Fresh fish is also Air France-KLM Group's number one export to China. But wine is not far behind. Chinese consumers bought more than 200,000 bottles of Beaujolais Nouveau in 2012, making it the world's sixth-largest market, ahead of Switzerland, Italy, and the United Kingdom, according to Ubifrance, France's export promotion agency.