Going Green to Save Green 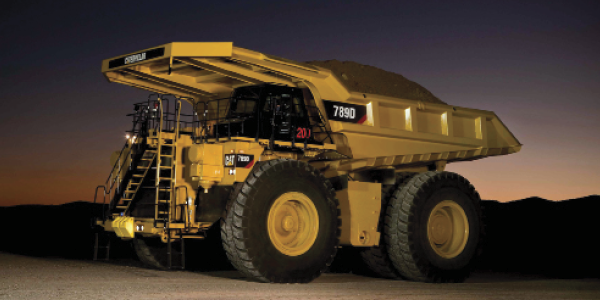 Can reducing environmental impact generate significant financial rewards? For Caterpillar, the proof is in the profits.

Lately it seems passenger vehicles, not freight trucks, are in the sustainability fast lane. In August 2012, the Obama administration announced strict new fuel economy standards for cars and light trucks. By 2025, passenger vehicles sold in the United States are projected to get 54.5 miles per gallon, on average. But, while passenger vehicles progressively benefit from technology that cuts emissions even as activity increases, freight is getting left behind.

"Freight will be the bad guy because passenger vehicles and light trucks are cleaning up their acts," says Jason Mathers, project manager for the Environmental Defense Fund (EDF), a nonprofit organization that helps companies improve environmental and business performance. "It is difficult to make a big diesel truck fuel-efficient."

Yet truck deliveries are on the rise. Currently, trucks exclusively serve more than 80 percent of U.S. cities and towns. By 2020, 90.1 million tons of freight are expected to move throughout the United States daily. And freight trucks are on pace to increase their carbon emissions by 40 percent over the coming decades, according to the Department of Energy's Annual Energy Outlook. These factors combined mean companies that ship any type of freight will face growing pressure to make operations more eco-friendly and sustainable.

Despite the obstacles, "companies can tap a wide range of operational strategies to improve environmental performance," says Mathers.

To prove that freight trucks can become more green, EDF reached out to a few private companies, as well as the MIT Center for Transportation and Logistics, Cambridge, Mass., which coordinates supply chain research efforts and helps organizations increase productivity and reduce economic and environmental impact. EDF offered to demonstrate how reducing emissions through logistics was indeed possible, and that such efforts often reap the added benefit of reducing costs.

"EDF asked us to document their projects, and help give companies a pathway toward opportunities for improving cost efficiency and becoming more environmentally friendly," says Dr. Edgar E. Blanco, research director at the MIT Center for Transportation and Logistics. "We then hired researchers and dedicated significant time working with the companies alongside EDF."

Caterpillar was one of the first companies EDF contacted. The Peoria, Ill.-based manufacturer of construction and mining equipment, diesel and natural gas engines, industrial gas turbines, and diesel-electric locomotives was working on a long-term sustainability strategy, and was interested in participating in the study.

"Internally, we are looking at ways to make our own operations more efficient. Externally, we are trying to find ways to make our customers more efficient," says Terry Goff, Caterpillar's director of emissions regulation and conformance. "The EDF project fit perfectly into our corporate-wide strategy to provide work environments, products, services, and solutions that make efficient use of the world's natural resources and reduce unnecessary impacts on people, the environment, and the economy."

Caterpillar chose its Global Mining division, based in Decatur, Ill., as the basis for the study. "We wanted to hone in on one facility to fully develop the detailed sustainability process before we applied it across the company," says Goff.

To launch the study, EDF and MIT analyzed the inbound shipping operations of Caterpillar's large mining truck facility. They wanted to identify opportunities—based on weight, packaging, routing, and scheduling—to streamline shipping protocols and reduce carbon emissions associated with the supply chain. Through this analysis, EDF and MIT identified two key areas—packaging and consolidation—that would potentially reduce costs and carbon emissions.

Packaging: To take delivery of the thousands of parts required to manufacture a mining truck, Caterpillar uses large returnable steel containers, which are specially designed to protect and transport parts. The containers vary in shape and size, and can hold loads ranging from 3,000 to 6,000 pounds. Many of these containers have been in circulation for more than 50 years.

For the past four years, Caterpillar has been working to phase out the steel containers and replace them with plastic containers, which weigh considerably less: a steel tote box weighs 235 pounds; a comparable plastic container weighs 70 pounds. Lower packaging weight translates to lower shipment weight, requiring less fuel to truck parts to Caterpillar's plant.

Consolidation: To construct the very large vehicles used in the mining industry, parts are shipped to the Decatur manufacturing plant from all over the world. Currently, most suppliers ship directly to the plant, regardless of geographical proximity. EDF and MIT analyzed historical shipment data to identify areas where shipments could be consolidated to save fuel and reduce vehicle CO2 emissions.

A number of requirements and constraints came into play when considering inbound shipment consolidation. First, each part requires a certain type of packaging and handling to ensure safe delivery. At the same time, shipment weight and shipping vehicle capacity limit the number of shipments eligible for consolidation. Many parts required for the mining vehicles are sizeable, and storing them for long periods is not a viable option. Shipments need to arrive on time according to their scheduled assembly process to minimize storage costs and optimize production. Finally, adding stops to an existing route increases time and costs, and must be offset by a total cost savings and emissions reduction.

Taking these factors into account, and in order to estimate the cost and environmental benefits of inbound supplier consolidation, EDF and MIT developed a shipment-clustering algorithm. To develop this algorithm, they:

Through the study, EDF and MIT determined that light-weighting shipping containers had the potential to reduce CO2 total emissions by 16.5 percent across Caterpillar's North American network. Carriers transporting Caterpillar parts would also save fuel by moving lighter shipments, and would pass on some of these savings to Caterpillar in lower fuel bills and lower fuel surcharges. And, clustering inbound shipments would allow for an additional emissions reduction.

"The carbon reduction was more significant than I had estimated," says Mathers. "And at the same time, Caterpillar was able to save on transportation. It was satisfying to put numbers to efforts through this study, and look at how we might get more cargo on trucks in order to bring down carbon emissions and costs."

Prior to the EDF/MIT study, Caterpillar's internal analysis had already determined that the fuel savings from lightweighting inbound containers would be significant. Yet Caterpillar had been slow to adopt the plastic containers because of several internal organizational and budgetary constraints:

While these constraints initially slowed the transition, the study results had the opposite effect. Solid scientific evidence of the proposed changes' effects helped reinvigorate efforts to replace old steel containers with lighter plastic containers.

"As a result of the study, the Decatur team outlined a process to move from its current packaging procedures to the lighter-weight options, all while following the Caterpillar Production System principles," says Goff. "The new packaging process also drove changes in other areas such as receiving and transportation. This project brought visibility to opportunities Caterpillar can capture to substantially improve internal processes by initiating moves to lightweight packaging."

Added benefits that are harder to measure financially are the lighter containers' ease of handling, and the opportunity to further standardize inbound shipments.

Planning for the Future

Currently, freight transportation accounts for only 10 percent of total global emissions. This statistic means MIT's Blanco occasionally must field questions regarding the necessity of studies such as the one conducted with EDF and Caterpillar.

"Evidence suggests that transportation-related emissions are increasing faster than other emissions, and they will continue to grow," says Blanco. "We need to find ways to curb that growth sooner rather than later."

"Transportation-related emissions are on the wrong trajectory," agrees Mathers. "But shippers can find opportunities to increase efficiencies and reduce emissions by selecting modes carefully, consolidating loads, and siting distribution centers in centrally located geographies. Shippers occupy a privileged position from which they can influence a huge, global community of manufacturers, retailers, and service providers, including transportation companies."

While sustainability requirements may seem like just another compliance headache to many companies, the dynamics of transportation and logistics mean a reduction in emissions can also help the bottom line.

"In transportation, what's good for the environment is also good for business; you don't find that in all industries," says Mathers. "Freight is an area ripe for saving money through sustainable practices."

"The Caterpillar study is a great example of how a company can drive savings to the bottom line and improve sustainability at the same time," adds Blanco.

"Changing our packaging and transportation involved some upfront work, but the benefit— saving money through a more sustainable process— is worth that extra effort ," Goff says. "The correlation between process efficiency and environmental benefit is a strong driver for innovative and environmentally friendly business choices."

Armed with data from the study, Caterpillar clearly understands the benefits of light-weighting and load consolidation, and is committed to following a well-scheduled program of sustainability improvements into the future.