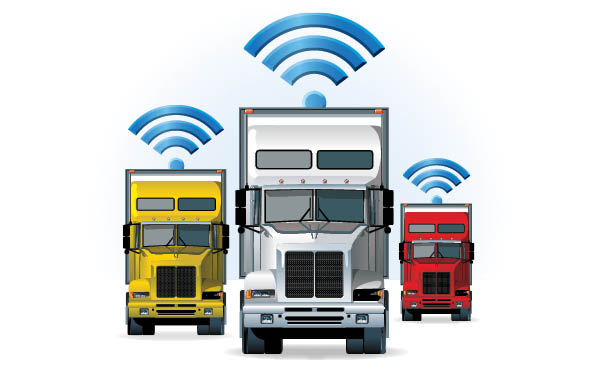 The trucking industry has changed dramatically over the past 50 years. As domestic and global economic pressures squeeze the operating margins of trucking companies, mobile communications technology has emerged as a viable tool to help truckers move forward in a tough environment. For many carriers, mobile communications may prove to be the difference between revving up and giving up.

Where do trucking companies turn to meet these challenges, and others? Increasingly, they are embracing mobile communications technology.

From Excellent to Exceptional

"Our mission is to make truckers more safe, compliant, and efficient through the use of onboard technology," says Brian McLaughlin, president of PeopleNet Communications Corporation, a Minnetonka, Minn.-based onboard computing and carrier fleet communications provider. The company develops its own applications and partners with third-party providers to deliver solutions encompassing route management, safety and compliance, end-to-end vehicle management, and supply chain communications.

"We wrap together many different carriers, including approximately 40 Code Division Multiple Access (CDMA) providers, and represent that network to our customers," says McLaughlin. "Customers then deal directly with us."

The PeopleNet system comprises several components. Its onboard component offers a driver display that can be either portable or in-cab, graphical or text-based, according to the driver's preference. The wireless communication operates over cellular; cellular and satellite; or WiFi, so three modes of communication are possible between the truck and the back office. All information is delivered to the back office, where PeopleNet posts it on the PeopleNet Fleet Manager Web site.

One major carrier benefitting from this technology is Thomasville, N.C.-based Old Dominion Freight Line, which began using PeopleNet mobile solutions in 2009. Old Dominion is a national, less-than-truckload motor carrier providing one- to five-day service among six regions in the United States, and next-day and second-day service within these regions. The company's fleet totals more than 6,000 trucks.

"Before implementing the PeopleNet system, Old Dominion relied on paper logs," says McLaughlin. "The carrier didn't have an effective way of managing miles-per-gallon."

Old Dominion also did not utilize many advanced safety tools, such as technology in the cab to measure speed, speed vs. the speed limit, or other safety metrics. Further, it lacked an efficient way to manage route efficiency.

These issues improved, however, after installing the mobile technology tools. "Once the PeopleNet system was installed, Old Dominion was able to accurately measure miles-per-gallon, idle times, stop times, and travel times," says McLaughlin. "It was also able to significantly increase fuel performance, reduce fuel spend, and boost driver efficiency. Additionally, the use of electronic logs helped the fleet become safer and compliant, which had a positive impact on Old Dominion's CSA score."

Because CSA scores are public information, this is a critical benefit. If a carrier has a good safety score, it will be able to attract good drivers and customers. If a carrier has a bad score, however, everyone knows it. Drivers don't want to work for fleets with bad scores, shippers don't want them to haul their freight, and in some cases, authorities can take action to shut them down.

"Old Dominion was a safe carrier to begin with, and had an excellent CSA score," says McLaughlin. "But mobile technology was able to make it even better and help the company continuously improve."

The PeopleNet solution began paying dividends even before it went live across the organization, according to Tom Newby, Old Dominion's director of field maintenance. "While we were testing the system, we received a fault code from PeopleNet indicating low oil pressure in one truck," he explains. "A maintenance representative called the driver, and instructed him to pull over and park."

As a result, Old Dominion incurred minor repair costs, compared to the engine failure that would have occurred if attention to the problem had been deferred until the driver returned to the terminal for diagnosis. "We saved $20,000 -- the cost of a catastrophic engine failure," Newby says.

State of the Art, Improved

One of the industry's best-known mobile communications tools is the Delivery Information Acquisition Device (DIAD), which UPS introduced in 1991 (see sidebar, page 76). In February 2012, UPS began global implementation of the fifth-generation DIAD V. The new smaller, lighter computer will boost UPS driver productivity, while accelerating the delivery of package information to the UPS network, including shippers, according to the expediter.

The computer also is the first in the industry to leverage Gobi radio technology, which allows instant switching of cellular carriers if one signal is lost. This feature ensures the device stays connected to the UPS network.

"Gobi dramatically increases our coverage and keeps connections more robust so drivers are in coverage for the maximum amount of time throughout the day," says Todd Brown, project manager at UPS. "We try to hit 100-percent coverage, which is not always possible. But with Gobi, we can switch between radio technologies while drivers are out on their routes."

This allows UPS to be in constant contact with its drivers, and to know where they are and what they are doing. It also allows UPS to dispatch new work to those drivers.

When UPS talks about visibility, it's largely from the shipper's perspective. "Basically, we deliver a package," explains Brown. "The driver enters the shipping information; it ends up in the mainframe computer and the customer can see a proof of delivery almost immediately."

DIAD also provides visibility to UPS operators. "Several systems allow the call center operators to monitor activities on the road," says Brown. "If a customer calls for a pickup, the operators have the tools to locate the driver closest to the customer so that we can meet our commitment times."

The data also helps operators change routes if circumstances warrant. The initial route optimization work is done when the driver leaves in the morning. The goal, however, is to optimize routes throughout the day, so if traffic or another situation delays a driver, UPS can factor these new conditions into the initial optimization.

Brown is not sure where the future of mobile communications is headed; but he knows it is headed there faster.

"Mobile communications are moving faster; data throughput across the air now happens as fast as when physically connected through a jack in the office," he says.

"That speed allows us to send more data," he adds. "Information we currently package up and send across the wireless LAN in the morning will become information we can send cellularly throughout the day."

Because UPS has 100,000 drivers on the road on any given day, it tries not to saturate communications networks with a lot of data. But, as throughput increases, the expediter will be able to send more data.

Both Brown and McLaughlin agree that driver resistance to new technology has diminished appreciably in recent years.

"Some drivers were resistant when we introduced DIAD in 1991," notes Brown. "But today, the drivers understand what having electronic data has enabled."

Every UPS driver uses a manifest that provides full visibility to all packages in their truck. Prior to DIAD, a driver would take out one package, then see what the next one was.

"Five to 10 years ago, drivers were resistant to the changes brought on by onboard communications, but the pendulum has swung dramatically," says McLaughlin. "In the old days, when drivers arrived at a stop, they would have to write down when they arrived, what they delivered, and when they left. It was like a math quiz.

"All that is automated now," he continues. "When drivers arrive at a destination, a geofence around the stop automatically records arrival and departure; and an electronic form prompts them for information about the goods delivered."

McLaughlin recalls one trucking company whose oldest and best driver vehemently fought the adoption of PeopleNet technology. The driver thought the communications system would take away his freedom.

One year later, when he got a new truck, this same driver demanded that the system be installed in the truck before he would drive it.

What better testament to the power of mobile communications systems?

DIAD, Then and Now

DIAD (Delivery Information Acquisition Device) is the handheld data collector UPS drivers use to record and transmit delivery information across a mobile cellular network. It also helps UPS save 59 million sheets of paper each year. Here's a look at DIAD's evolution.