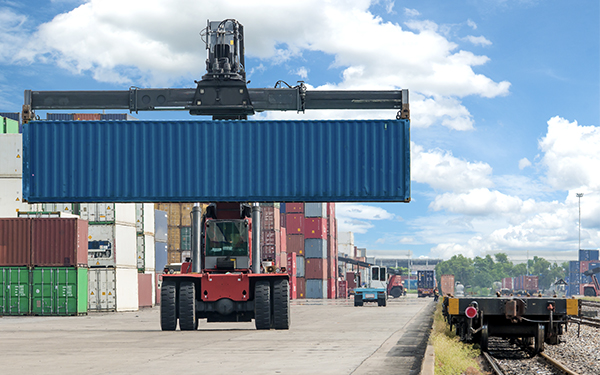 Intermodal volumes grew by 5.6% in the United States in 2018, the most robust increase in the field in the past five years, according to the Intermodal Association of North America. In the face of tight truck capacity, the appeal of intermodal continues to grow for many shippers.

An organization can't just jump into intermodal, however. It needs access to a facility that can support an intermodal operation and its unique needs. As a result, real estate developers are physically enhancing facilities to accommodate shippers with intermodal aspirations, notes Ken Stratton, vice president of operations for intermodal marketing company Interdom LLC, a subsidiary of Odyssey Logistics & Technology Corporation.

"Expansion projects are starting to include additions that can better serve the intermodal market," Stratton says. The country's infrastructure is capable of handling the current intermodal volume but continued investment is needed.

"We see constant changes and upgrades throughout the country in different areas that serve the intermodal market, such as ocean terminal expansion or inland logistics centers," Stratton says. "Improvements in the intermodal infrastructure will benefit both shippers and logistics providers—it's a win-win."

A combination of factors can make a site appealing to intermodal-minded shippers.

Location is the chief consideration for any quality intermodal site, says Rick LaGore, CEO of Indianapolis-based Intek Freight and Logistics, a rail and over-the-road solutions provider. For instance, Intek has customers that want to get involved in intermodal shipping but their current sites fall outside a 100-mile radius of an intermodal terminal (also known as a ramp), making this transportation option cost-prohibitive. Locating near high-volume lanes allows shippers to take advantage of the efficiencies that long-haul rail provides. In short, proximity is key.

"Companies need to be within 100 miles—and it's better to be within 50 miles—of an intermodal ramp," LaGore says. "Location is important for shippers to be able to get the best transportation rates and to make sure they have plenty of capacity to manage their inbound and outbound freight."

Stratton agrees that location is an essential component when considering an intermodal facility's value. "For example, Odyssey operates a 121,000-square-foot intermodal center in Joliet, Illinois," he says. "The facility is strategically located at the CenterPoint Intermodal Center—Joliet/Logistics Park Chicago—and provides easy access to BNSF intermodal railyards through the park's private, heavyweight road system.

"Additionally, the new facility makes it easier to move freight in and out—it's no longer affected by the congested highway system in metro Chicago that has posed challenges for the industry," Stratton adds.

"Pay attention to that congestion when you're selecting an intermodal facility," LaGore suggests. "Pick a site close to the highway exit. Note traffic patterns and make sure the infrastructure is adequate for your needs."

Brian McKiernan, senior vice president of development for CenterPoint, an innovator in the investment, development, and management of intermodal centers, says privately developed and managed facilities still ultimately depend on public infrastructure.

"Those roads and highways are important parts of the facilities," McKiernan says. "So it becomes important to keep up with highway intersections, bridges, and county, city, and state roads—and the permit processes associated with that. You have to consider and design around those factors for a site to remain successful."

Some facilities offer physical features that can help attract shippers with intermodal needs, says Stratton. Successful intermodal facilities feature an ample number of docks, drive-through bays, and trailer positions. Recent expansions Interdom is exploring include the on-dock at the GCT Bayonne Terminal in Bayonne, New Jersey, and the new on-dock terminal expansion at the Virginia International Terminals in Norfolk.

"Expanding terminals to offer new on-dock rail facilities or expanding current facilities with on-dock rail capabilities would be a major improvement," Stratton says. "This would allow shippers to take a drayage move out of the supply chain for import or export moves."

It's critical for companies developing intermodal facilities to consider many factors both inside and beyond the four walls.

"Inside the facility, it's important to pay attention to the flow of trucks coming into the facility," LaGore says. "Make sure there is plenty of space for trucks to do their backup and entry out of a dock.

"Also, you need to make sure there's plenty of space to handle drop trailers and drop containers," he adds. "Being carrier-friendly is key, and a big factor in that is allowing drivers to turn off docks quickly."

Managing growth and changing practices in intermodal shipping can be a constant challenge, notes McKiernan. For instance, when the BNSF Logistics Park Chicago opened in 2002, trains typically were less than 10,000 feet long. Today, they're reaching 12,000-plus feet.

Nonetheless, more shippers should be taking advantage of intermodal shipping. "Small to mid-sized shippers tend to not play very much in the intermodal market," notes LaGore. "There are still many companies that could benefit by using intermodal." A key determinant will be sites designed to serve them.

A crucial thread connecting the facilities is their location near major transportation nodes.

The strategy behind deciding where to locate CenterPoint's intermodal centers often starts with shippers.

"It's important to work with clients to understand what trade lanes and services they're using because they're the ones who ultimately drive where the containers are going and what locations make sense," McKiernan says. "We also work closely with the Class I railroads to make sure we understand where they want a facility and how it would fit into their networks."

Similarly, CenterPoint works closely with shippers and others to determine physical features and design elements that will work best for them, says McKiernan.

"Each company is going to have a slightly different design standpoint based on the trade lane of what they're doing at the facility," McKiernan says. "We've seen companies go to grounded scenarios lately, which allows for more densification of operations, while a wheeled operation seems to be a good fit for companies that move lower volumes or have more real estate."

When the company reached the second phase of the development, it assembled land for Union Pacific. It also privatized and took responsibility for the roads, ultimately allowing tenants to run heavy weights on the roads without permit fees.

CenterPoint strives to develop sites that allow for flexibility as practices change in the intermodal field, says McKiernan. Advances arrive quickly—for example, the increasing use of automation at West Coast ports—and CenterPoint is determined to ensure that its clients are equipped to adjust and adapt within their existing facilities.

"We're seeing companies find efficiencies in a lot of different ways now," McKiernan says. "We're making sure that we're designing facilities that can accommodate those evolving efficiency trends over time."

Duke Realty leverages intermodal facilities in Savannah, Dallas, and Chicago. But the industrial real estate developer, which has started the development of more than $1.5 billion of new industrial product during the past two years, is most active in its intermodal efforts at Rickenbacker Global Logistics Park, a master-planned business park that is part of the North American International Freight Center in Columbus, Ohio.

The majority of Duke Realty's facilities at Rickenbacker have been "build-to-suit"—designed and built to meet the needs of specific clients.

"In these instances, we work closely with the tenants to ensure the building incorporates features that are important to them and help them operate as efficiently as possible," explains Art Makris, vice president of leasing and development for Duke Realty in Columbus and Nashville. "We work diligently to be sure we deliver. Duke Realty has had an in-house construction team for nearly 50 years so we have a strong track record of delivering first-class industrial buildings with the features our customers want and need."

A number of physical components of Duke Realty's intermodal facilities are important to Rickenbacker tenants. They want buildings that clear 32 feet or higher; often incorporate mezzanines for greater product storage and efficiency; have column widths conducive to today's forklifts, robots, and other product-moving equipment; are designed and built to accommodate the tenant's product-handling equipment; have a plethora of dock doors; and have ample parking for cars and trailers.

A crucial advantage at Rickenbacker is a loaded-to-capacity zone that can accommodate vehicles with up to 120,000 pounds of gross weight on the roads. "Duke Realty, in turn, has incorporated upgraded features in and around our buildings to accommodate these larger, heavier loads," Makris says.

"For example, thicker concrete is used in truck courts and the loading areas and heavier-duty levelers are installed on dock doors because of increased vehicle weights," he says. "In addition, greater security is necessary to protect the large volume and value of items coming into the intermodal park and to meet U.S. Customs requirements. Companies in the intermodal park widely request secured truck courts with guard shacks."

The location of Duke Realty's buildings in the loaded-to-capacity zone allows tenants who have product arriving via rail to maximize the volume of "heavy" product loaded into containers, providing efficiencies in the number of containers that are imported. Without the zone, containers would need to be lighter weight to meet legal highway limits.

TexAmericas Center, one of the largest rural industrial centers in the Americas, is located in an area that seems ideally suited for an intermodal facility. Situated in Northeast Texas, approximately 15 miles west of Texarkana, the park already offers ready access to Interstates 30 and 49 and sits in the immediate vicinity of the planned Interstate 69 corridor. In addition, the park owns 36 miles of rail, and Union Pacific, BNSF, Kansas City Southern, Texas Northeastern Railroad (a Genesee & Wyoming railroad), and Amtrak all run through the area.

TexAmericas Center so far lacks the facilities to support intermodal shipping, but the park's officials hope that will change soon.

"We've got tremendous logistics assets, but the intermodal market just isn't being served yet," says Eric Voyles, executive vice president and chief economic development officer for the park. "We see that as a big opportunity for our area. So, we're working to develop a multi-commodity transload facility for the Texarkana area on our property.

"Feasibility studies show there are more than 40,000 lifts annually that go unfulfilled in this market and are being forced to be handled by trucks," Voyles notes. "It would be a major economic boost for local companies that are transporting now by truck to have their commodities handled by rail."

The TexAmericas Center incorporates more than 12,000 acres of land and more than 3 million square feet of office and industrial space. The organization is a Texas special-purpose district formed to redevelop its property, a former military installation. TexAmericas Center has extensive capacity for growth, says Voyles.

"We offer all the services that a private development company can offer—build, manage, lease, sell—but we also function like a government entity," he explains. "We offer incentives. We approve our own zoning and building permits. We are about as one-stop as you can get from the standpoint of trying to fast-track a project.

"As we continue to work at certifying our property and qualifying it for development—we have about 2,000 acres that are development-ready right now—we can do projects quickly for companies that need speed to market," Voyles adds.

In its pursuit of a transloading facility, the TexAmericas Center is working with the local metropolitan planning organization to better quantify the commodities that need the service and to analyze the rail system to determine what improvements are necessary. The park is also working with consultants to help select the ideal location for the facility.

Demand for intermodal capabilities in Texarkana is evident. A transload facility would drive down costs of operating in the park and "make us an even more attractive logistics location," he says.

"Just about every other month someone asks us if we can manage transload on our property," Voyles says. "And we have to tell them that we don't have the equipment. We get requests for steel, grain, plastic pellets, rock, timber, paper, agriculture, and building products. There is clearly a lot of interest."

While pursuing a long-term transload solution, Voyles says, the park is considering acquiring equipment to provide a temporary solution and enable clients to access a transload presence in the near future.