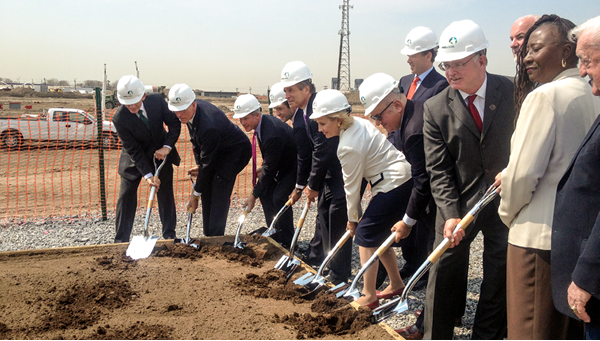 New Jersey and sustainable development are perfect together. Industrial real estate developer Prologis recently broke ground on a new, 880,000-square-foot distribution facility on the Hackensack River in Jersey City, N.J. The Prologis Pulaski Distribution Center, a 50-acre former landfill, is located four miles from the Port of Elizabeth and three miles from New York City. Any new development of this size in the capacity-choked environs of the Big Apple is remarkable in itself. But the Prologis Pulaski DC is unique to the core.

"This project will transform a former waste disposal Superfund site into a functional property with usable green land in the most dynamic and land-constrained infill area in the United States," said Jay Cornforth, president of the east region of Prologis, and emcee of the groundbreaking ceremony.

"Not in my back yard" is a recurring echo in the world of port industrial development, as public and private sectors wage war over land use. But the Pulaski project pushed even that paradigm. When Prologis acquired what was intended to be a graveyard from the Archdiocese of Newark in 2005, the objective was clear: breathe life back into an old, polluted industrial site. To hear N.J. state officials talk about the efforts involved in cleaning up and remediating the property, it was the ultimate resurrection.

The Prologis Pulaski facility, which will create 800 new jobs at full occupancy, offers a shining example of how sustainable DC development can reverse an urban area's fortunes.

"When I first saw this site, it struck me as surreal, almost otherworldly: partially exposed buried drums; intense fires burning below ground; smoke billowing from cracks and fissures in the earth; entire trees and sections of road constructed on site collapsing, disappearing into the earth," said Ken Kloo, director of the N.J. Department of Environmental Protection Site Remediation Program.

"Conditions were so unique at the time that the Department of Environmental Protection hired a firm from Texas that fought oil field fires to come in and extinguish the underground fires," he added. "That was 28 years ago. Now everything has changed."

Jersey City Mayor Jerremiah Healy painted a more concise picture: "There were underground burning dumps. Then another issue erupted. We had a dump on top of a dump. The property had no value, provided no jobs, and because it was owned by the Archdiocese, contributed no tax revenue. Now it has turned into something positive."

Following the acquisition, Prologis hit a number of starts and stops as community opposition, environmental due diligence, re-zoning, and the recession impeded progress. Now that construction has begun, the LEED-designated facility is expected to be complete and operational by 2014. And it already has two tenants—food retailer Ahold USA's online grocery unit Peapod; and Imperial Bag & Paper Co., which provides paper plates, plastic cutlery, and other basic supplies to retailers, restaurants, and food service companies.

Imperial Bag & Paper's business has grown 250 percent over the past five years, and it needed a location to consolidate three existing facilities, including its headquarters in nearby Bayonne.

The company was aggressively courted by New York to site a new DC, but chose Pulaski due to its proximity to the port, major highways, and New York City—where 30 percent of its customer base is located.

"We help our customers by delivering product quickly and as often as needed—six times a week for some clients," says Robert Tillis, CEO, Imperial Bag & Paper. "Instead of using space for storage, a retailer can use that same square footage to sell products, or a restaurant can set up another table for diners.

"To meet this delivery schedule, we need direct access to major highways and to be close to Manhattan and other boroughs," he adds. "Quick and easy access to the port also benefits us by eliminating delays in receiving merchandise from overseas."

No less important, the new DC is still local for the company's 400 employees, so they expect little turnover when the transition is complete.

The Prologis Pulaski facility, which will create 800 new jobs at full occupancy, offers a shining example of how sustainable DC development can reverse an urban area's fortunes.

"Site remediation is much more than eliminating threats to public health and the environment," said Kloo. "It's about turning environmental liabilities into assets, creating economic opportunities, and revitalizing communities."

A majority of trucking companies (62 percent) are using fewer brokers than six months ago, according to Transport Capital Partners' (TCP) first quarter 2013 Business Expectations Survey. The percentage of carriers reporting an increase in brokered freight services doubled between August 2012 and February 2013, from 16 percent to 35 percent, a reflection of seasonal freight fluctuations.

Brokerage spot market freight still accounts for less than five percent of volumes for almost 50 percent of carriers—about the same as February 2012, traditionally one of the highest quarters for the use of broker services.

Smaller carriers rely on brokers more often than larger carriers because they have lower lane density and fewer marketing staff, according to TCP. The increase in the number of carriers reporting the use of broker services could also be tied to overall optimism for volume and rate increases.

Voice Technology: Can You Hear Me Now?

While voice technology has been widely used in many different supply chain applications, industry has yet to fully reap its benefits, according to Voice Information Associates' 2013 Voice Technology in the Supply Chain (VSC) market report.

The Acton, Mass.-based speech technology research company projects 22.6-percent compound annual growth in the VSC market for 2012 through 2017. A growing recognition among adopters that ROI payback periods are extremely short, based on improvements in productivity and accuracy, is driving that forecast. Still, voice penetration in distribution centers is approximately eight percent, says the report.

The research reflects how voice-directed applications are gaining traction across distribution centers and industries.

"In the past, voice was a picking-centric technology," notes Bruce Stubbs, industry marketing director for distribution center operations at Everett, Wash.-based technology solutions provider Intermec. "Typically, 60 percent of labor in a DC is involved in picking, so it was easy to sell voice technology into those situations.

"Today, however, companies are trying to enhance their initial investment, and take advantage of the efficiencies, ergonomics, and safety that voice enables—expanding the use of voice in fork and packing applications, and inventory control," he says.

"We've installed voice-picking solutions for years, but they tended to be a one-off application, restricted to particular industry verticals—companies in the grocery industry, for example, that had the foresight or a specific need," he says.

Voice solutions have become more flexible and affordable, and many WMS vendors provide necessary integration. While picking has always been a focal point, companies are now expanding its application to receiving, putaway, and quality control.

The use of voice-enabled hardware and software solutions also dovetails with the need for greater mobility in the warehouse. Companies are moving away from rigid layouts. They want flexibility, whether it's in managing multi-channel fulfillment or mediating seasonal demand and inventory fluctuations. This changing dynamic plays well with Intermec's business.

"Companies are looking at multi-purpose devices," says Stubbs. "Businesses that deploy a voice-enabled mobile computer or vehicle mount can use that mobile computer in all warehouse processes: receiving inventory; performing scans and image captures for quality control and load condition purposes; putting it on a belt and picking with it; putting it in a docking station on a forklift and using it for putaways and replenishment.

"They can also turn around and pack or load with it," he adds.

Healthcare providers could benefit from a dose of retail supply chain therapy, according to a new University of Arkansas study.

"Conversely, healthcare has been relatively slow to adopt these methods," he adds. "The healthcare supply chain might gain efficiencies by adopting best practices from the retail supply chain."

Pohl and his colleagues surveyed healthcare and retail managers to better understand the gaps between the two supply chains, and to learn how each might benefit from sharing best practices.

The retail supply chain has done a better job in the critical area of collaborative planning, forecasting, and replenishment, which involves suppliers and retailers working together to adopt order forecasting and inventory planning to create an integrated supply chain network.

Healthcare is struggling to keep pace with retail in another critical area: scanning and tracking applications, as well as professional training and education—specifically the skills associated with materials management, purchasing, and warehousing.

Across both industries, 80 percent of respondents say the identified best practices had a significant or very significant business impact.

The healthcare industry is underestimating the investment necessary to achieve the full benefits of some best practices, University of Arkansas researchers conclude.