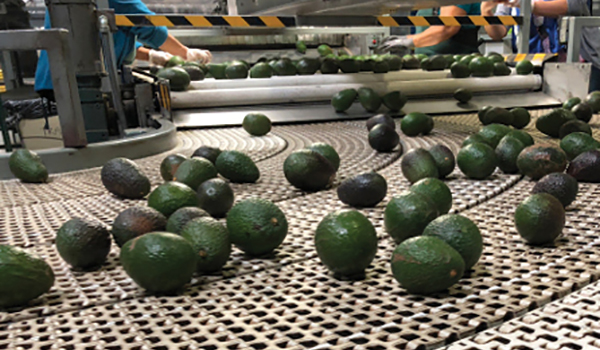 Between 2007 and 2018, average avocado production around the globe grew by 5.3% annually, to about 6.4 million tons in 2018, according to Research and Markets. West Pak Avocado, an avocado grower and distributor based in Murrieta, California, has helped drive this increase.

THE PROVIDER
ITS Logistics, based in Sparks, Nevada, is a third-party logistics company that offers personalized supply chain solutions with dedicated fleet and asset-light transportation as well as omnichannel distribution and fulfillment services.

With increasing year-round demand for avocados, an extensive supply chain, and broad customer base, an effective logistics operation has become key to West Pak's success. ITS Logistics, a third-party logistics (3PL) provider based in Sparks, Nevada, is a critical partner in West Pak's growth.

From its start in 1982 as a grower and shipper of California avocados, West Pak Avocado has expanded to five distribution facilities across the United States and Mexico. The company sources avocados from an extensive grower base in California, Mexico, Chile, Colombia, and Peru, says Heath Shoup, vice president, sales and product management. West Pak distributes the knobby green fruit throughout the United States, Canada, Mexico, Japan, China, South Korea, Hong Kong, and the Middle East.

Its brands include Lil' Cados—as the name suggests, these are smaller and perfect for snacking; AvoMonsters, with fun packaging geared toward kids; and California Gold Avocados that are, not surprisingly, grown in California.

A chance meeting in 2013 launched the ongoing business partnership between West Pak and ITS. Shoup and his wife were at a resort on their honeymoon, and Shoup was wearing an Anaheim Angels hat. Manny McElroy, vice president of sales with ITS, noticed it and asked if Shoup was from California. The two talked, and their conversation revealed mutual friends, as well as the potential to do business together.

ITS began its partnership with West Pak by brokering refrigerated units moving from Texas to California. West Pak had a distribution center in Edinburg, near Texas's southern border, that handled avocados coming in from Mexico.

"We start any new carrier with internal transfers, or moving products from one warehouse to another," Shoup says. Once a carrier has a proven track record—they're on time, reliable, and stand behind their service—West Pak moves them to operations such as processing loads for retail customers.

ITS focuses on building relationships rather than just looking for one-off transactions. "Having a strong business relationship or partnership goes longer than trying to make a quick buck," McElroy says.

Its customer base spans mom and pop businesses to Fortune 500 enterprises. "We look to see if the relationship fits and we can both add value," he says. "We want to find customers whose supply chain fits into our network, so we can develop the most cost-effective transportation options for the customer."

As part of its work with West Pak, ITS helped analyze potential locations in the Dallas metro area, examining the availability of trucks and trailers. The new facility is located on the south side of the Dallas metro area, near other produce distributors. It's also close to a ready supply of employees—a key consideration, given that the facility operates 24/7. And, because the Dallas-California route is an established lane, drivers know loads will always be available.

West Pak's Dallas facility, which took about one year to build, handles packing, preconditioning, and cold storage, among other functions, for the thousands of loads that move through it each year. One load is about 1,600 cases, each weighing about 25 pounds. In avocado terms, a load consists of approximately 51,000 large or 135,000 small avocados.

ITS helped stock the new facility and develop a new transportation network in the Dallas area. During the move, which lasted about three months, ITS also maintained the transportation capacity West Pak needed to continue its existing operations. Also throughout the process, ITS was able to keep transportation rates consistent.

"We helped West Pak move all their products from Edinburg and restaff the warehouse," McElroy says.

Today, ITS provides West Pak with a range of services. It procures and schedules backhaul routes that help leverage West Pak's fleet of 10 trucks. ITS manages the loads and drivers, checking that the routes are as efficient as possible. These efforts minimize the times the trucks run empty, while also generating additional revenue for West Pak.

Another service ITS provides is appointment scheduling for West Pak's major customers; the 3PL currently manages deliveries for more than 75% of West Pak's customers. Many retail customers enforce strict appointment times, making it crucial that the drivers are on time.

"We're the last to touch the product before it's sold," McElroy adds. By taking on this responsibility, ITS frees West Pak's logistics department to focus on generating additional sales and boosting its operations.

Many consumer companies prepare for a spike in business during the year-end holidays. West Pak, like many businesses in the avocado industry, breaks from the crowd a bit; its largest peaks tend to fall around Super Bowl weekend and Cinco de Mayo.

"During the Super Bowl, we experience a substantial lift in sales," Shoup says. Americans consume approximately 53.5 million pounds of avocados on Super Bowl Sunday, Treehugger.com reports. If the guacamole consumed that day was stretched across a football field, it would reach nearly 12 feet high.

Moreover, this increase occurs just weeks after the typical December peak, keeping many carriers and other logistics providers running fast.

ITS works with a driver network that provides steady pricing and availability, including through these peaks. "The drivers anticipate it," Shoup says.

ITS also assists with West Pak's preconditioning program, which is an important part of West Pak's business model, Shoup says. As the term notes, the company ripens avocados ahead of time for major retail and food service accounts.

ITS ensures its trucks are precooled before loading up West Pak avocados. "When the products are loaded, the reefers (refrigerated trailers) are cooled so there's no fluctuation in the core temperature," McElroy says.

ITS has helped West Pak grow this business by ensuring on-time and fast deliveries to these customers. "As West Pak looks to incorporate more value-added services, we see ITS as a reliable partner to help continue to drive those extra sales," Shoup says.

Indeed, ITS actually starts forecasting for the Super Bowl as early as July. By January, orders start to pick up. "We're there to support whatever the customer orders in terms of hardness, color, or size," McElroy says. "We're both there to make each other successful."

To that end, if a situation arises in which a claim is placed on a load because the product was damaged and the customer refuses to accept it, ITS will assess the situation and work to resolve it. "We get the customer what they need," McElroy says. "We're only successful if West Pak's customer is satisfied. Their best interest helps drive our decisions."

That thinking helps strengthen the working relationship between the two companies. "Our teams work together to make sure products get to the customer on time," Shoup says. "We don't chase price to the bottom and pay for service, but still want to be competitive and have on-time deliveries."

Also key to the relationship is reliability. "Being able to depend on ITS day in and out, month after month, and to have confidence that our products will get there on time, with the proper temperatures maintained, is important," he says.

And, when a last-minute order or another challenge comes up, "I like to see carriers react," Shoup says. "I like to see them help with problems, and not just focus on the easy moves."

As with most business relationships, COVID-19 has impacted both West Pak and ITS. Demand for avocados fluctuated, especially early on when stay-at-home orders had consumers focused on staple, shelf-stable foods.

Then, whether due to concerns about COVID-19 lockdowns or racial inequality protests, many truck drivers didn't want to go to certain locations, Shoup says, adding that the drivers ITS chose made sure the company's products were always delivered on time.

"If there was any chance of delay, ITS was there communicating that and keeping us posted in real time," he adds.

Since 2013, West Pak has grown significantly, and now has secured about 7% of the global avocado market. ITS has benefited as well, capturing more of West Pak's business. For instance, in 2019, the volume of loads it moved for West Pak jumped by more than 40%.

"We'll continue to grow our partnership," Shoup says. "ITS is one of our top carriers. They're good partners for West Pak, and that's what we want and look for."

Grow the partnership as the company grows.