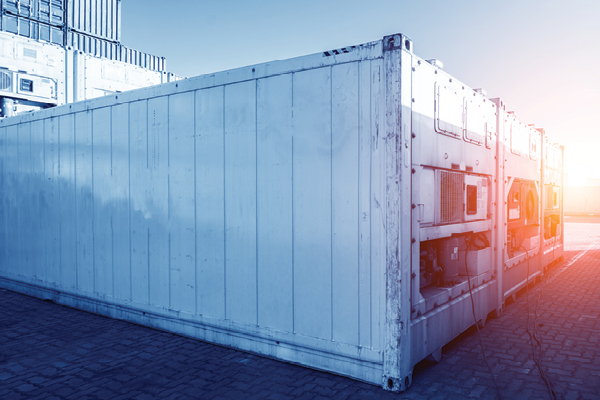 For some products, a few degrees more or less can spell the difference between successful delivery and catastrophic spoilage.

Items that need to stay cold throughout the supply chain range from the large—say, a containerload of fish—to something as tiny as human sperm. Some commodities travel safely when kept at temperatures you'd find in your kitchen fridge, while others require a deep freeze. Each relies on special technology to maintain the right conditions from door to door.

Let's take a look at how shippers keep the cold chain intact for a few specific kinds of cargo.

When someone is going through in vitro fertilization, and decides to transfer treatment from one fertility clinic to another, they might call on Los Angeles-based Pearl Transportation and Logistics to move frozen sperm, eggs, and/or embryos to the new location.

Pearl Transportation handles many types of human materials—such as blood, urine, and stool samples—bound for diagnostic labs. It launched its CryoCourier subdivision in 2020 to serve the special needs of fertility clinics.

Frozen sperm, eggs, and embryos must maintain a temperature of -165°C, says Lorena Camargo, CEO of Pearl Transportation. When it's time to transport them, a professional at the origin deposits the specimens, housed in special straws, into a tank that uses dry vapor nitrogen as a coolant.

CryoCourier uses the dry vapor form rather than liquid nitrogen to avoid spills if the tank should tip en route. That's not likely to happen. "Our drivers are trained, and there's a certain way to transport these tanks," Camargo says. But the dry vapor offers an extra level of safety during transport.

"With the tanks that we use, the temperature can be held up to 72 hours," says Camargo. That keeps the human materials safe whether they're bound across town or flying across the country.

"We do weekly shipments to Boston and New York," she says. "Those trips usually take 12 to 18 hours. We try to put them on direct flights to reduce that transit time." But tanks that maintain the deep freeze for 72 hours provide insurance against potential delays.

Each tank comes with a temperature monitoring system that transmits data via Bluetooth to the van driver's phone. CyroCourier accesses this data via a web portal to make sure the temperature remains correct throughout the trip. A GPS tracker maintains a log of the route.

Human specimens for diagnostics don't need the same deep freeze that fertility specimens require, but each one needs to be kept at a specific temperature on its journey to the testing lab.

While Peli BioThermal in Maple Grove, Minnesota, provides temperature-controlled packaging largely for pharmaceuticals, it got its start in the early 2000s with packaging the U.S. military used to deliver blood to Special Forces units in the field. It makes a similar product for emergency medical services to transport blood by ambulance or medical helicopter.

Blood is probably the most temperature-sensitive product transported in Peli BioThermal's packaging, says Adam Tetz, director of worldwide marketing. Blood needs to stay at between -2°C and -8°C. "If it goes out of range, it isn't usable on an injured person," he says.

The company's packaging uses a coolant made of paraffin and other materials, which releases thermal energy as it changes from solid to liquid. Placed in an insulated compartment, this phase change material (PCM) can keep blood or other human products at the optimal temperature for two to three days.

Before they're used, the PCMs in Peli BioThermal's flagship products must be cooled in special refrigerators for several days. But another solution in the company's product line, NanoCool, uses a simpler process.

"Users push a button, which pierces a water bladder inside the cooling engine," Tetz explains. "Then with a thin capillary of tubing, water goes to a desiccant, and that causes an evaporative reaction, which cools the payload space."

In the race to distribute COVID-19 vaccines, the pharmaceutical industry contends with an extra challenge that would not arise if time were not of the essence: Some of the materials used to maintain the cold chain pose potential safety hazards on aircraft.

One of those materials is dry ice, which expands in volume by 600% as the carbon dioxide changes from solid to gas. "That gas can displace oxygen," explains Jay Johnson, senior manager, Labelmaster.

Since that could pose a suffocation hazard in an aircraft's closed environment, regulatory bodies limit the use of dry ice in air cargo.

Shippers can't avert this hazard simply by transporting vaccines and dry ice in packaging that doesn't let gas escape. "You can't put dry ice in a non-vented container, because it tends to explode," Johnson says.

Labelmaster makes packaging that pharmaceutical companies have used to maintain the cold chain while transporting COVID vaccines, Johnson says. Beyond that, the company has also represented pharma companies before regulatory bodies, successfully arguing that the air industry could safely increase the amount of dry ice allowed on a plane.

Systems that shippers use to monitor the temperature of vaccines in transit also pose a challenge, since many of them use lithium ion batteries, which are considered hazardous goods, forbidden in the belly of a passenger plane.

Some manufacturers are looking to older technology as a workaround. "I had an hour-long conversation with a temperature data logger manufacturer, because they were having problems with lithium batteries," Johnson says. "They've gone back to the smaller-charge alkaline batteries to power some of their devices so they don't get bound up in some of the dangerous goods restrictions."

Refrigeration manufacturer Klinge Corp., in York, Pennsylvania, counts the pharmaceutical industry as one of its major markets. Company president Allan Klinge speculates that in the future, air could play a smaller role in transporting COVID vaccines.

"There will come a point when it will be a more normalized cold chain, where there will need to be deliveries all over the world," he says.

That includes places that don't have good facilities for air cargo, or that can't afford air transportation. Then, ocean transportation using refrigerated containers can provide an alternative.

Some COVID vaccines must be kept at -60°C or even lower. But not all vaccines require extreme cold. For immunizations whose ideal temperature is -7°C, one new product available for maintaining the cold chain is the Vaccine Freezer Monitor (VFM) -7°C from Timestrip in Cambridge, UK.

When preparing to transport a set of frozen vaccine vials, the user starts the VFM temperature indicator by pressing a button on the back. The monitor then goes inside the packaging along with the vaccine vials. If the temperature rises above -7°C at any time, the indicator shows an alert.

Catch of the Day

"The lifespan of fresh product begins to diminish the moment it's caught, so it's important that it move quickly via air or truck and have temperatures maintained at precise levels throughout the journey," says Alex McKallor, executive vice president and chief operating officer at Lynden Inc., based in Anchorage, Alaska and Seattle. Not only shouldn't fresh seafood get too warm, but it also shouldn't get too cold, lest it freeze and no longer command a premium price.

Frozen products require similar management, but since they are less time sensitive, they can move by ship or barge as well as truck or be kept in a refrigerated warehouse, McKallor says.

As a transportation and logistics company, Lynden serves all segments of the seafood supply chain, using multiple modes. "For example, our Hercules aircraft fly freshly caught seafood from King Salmon, Dillingham, and other areas of western Alaska to Anchorage, and we use barges to transport less time sensitive products," McKallor says.

Lynden uses refrigerated equipment to transport seafood and also uses ice, gel packs, and insulation blankets to preserve the cold chain. "It's also important that good pallets are used to help ensure a free flow of air, so the temperature is maintained consistently throughout the entire unit," McKallor says.

Refrigeration mechanics ride with cargo on barges, in case of a breakdown. The company also uses advanced technologies to keep an eye on seafood moving by air, water, or ground.

"Monitoring capabilities include the ability to receive alert messages should a refrigeration unit fail to maintain the required temperature, enabling corrective action to be taken immediately," McKallor says.

Lynden can adjust refrigeration temperature remotely, and can download data from refrigerated units to provide a full audit of the seafood's journey.

Seafood is another market for which Klinge Corp. refrigeration and freezer equipment is used both for shipping and storing. Some of its solutions are used to transport tuna that has been blast-frozen to -60°C to keep the meat firm and prevent browning.

"Taste tests have shown that you can't tell the difference between tuna that has been frozen in this way and then thawed, and fresh tuna," says Klinge. Companies save money when they ship deep-frozen tuna rather than fresh, since they can transport it by ocean in freezer containers rather than by air.

Klinge Corp. offers versions of its 20- and 40-foot deep freeze ocean containers that come with backup generators to provide extra protection in case of mechanical failure. The units also include monitoring systems that record temperature and, optionally, transmit an alarm if something goes wrong.

A monitoring system can be especially helpful when a container is handed off from the vessel to the port. "They're using a loading and unloading plan, showing which containers need to be plugged in, and their set points," Klinge says. "All that is transmitted between the two parties."

But with so many containers moving on or off the vessel, there's always a risk of error. "It can be very helpful to bring that visibility," he says.

Run for the Roses

The fourth quarter of 2021 left flower importers with many questions about how to bring in product for that crucial day on their calendar: Valentine's Day.

With 90% of flowers imported to the United States—mainly from South America—arriving by air, flower wholesalers and retailers don't face the same anguish as companies that rely on the brutally congested Asia-to-U.S. ocean pipeline. But air cargo space is also tight these days, says Christine Boldt, executive vice president at the Association of Floral Importers in Doral, Florida.

And ocean transport plays a bigger role in the flower trade than it used to, especially in the weeks leading up to Valentine's Day. That's when importers bulk up their inventories, and it gets harder to find temperature-controlled warehouse space. "As refrigerated facilities become less available, it makes the most sense to have the product in a refrigerated environment from the country of origin to the United States," Boldt says.

Cut flowers last a good long time when they're kept cold. Refrigerated ocean containers meet that need. And, as of fall 2021, the main flower ports, Miami and Port Everglades, were congestion-free, Boldt says.

When February comes, will it still be smooth sailing for long-stemmed roses? Will there be enough refrigerated ocean containers to meet demand? Will shippers who rely on air secure the cargo space they need? And once the flowers get to South Florida, will shippers find enough reefer trucks to speed them to market?

Whatever the questions, one thing is certain: Importers will get their flowers to consumers in time for the holiday. "Whether it's chartering extra planes or bringing product in earlier, whatever is necessary, importers will do it," Boldt says.