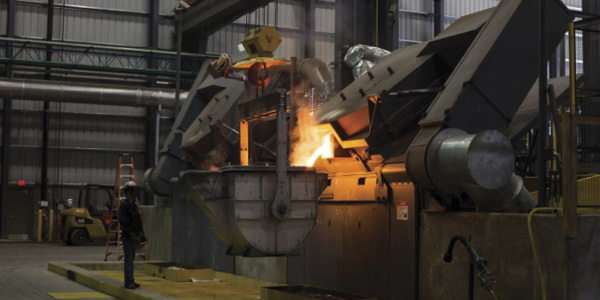 When sales of cast-iron cookware heat up, a well-known brand prepares a solution to expand manufacturing capacity and warehouse space.

Cast-iron cookware, a kitchen staple for generations, is surging in popularity. Industry experts attribute a 50-percent jump in sales this decade to millennials and others who appreciate cast iron's value and versatility. Home cooks can prepare nearly any recipe in cast-iron skillets and pots on the stovetop or in the oven.

Nobody knows this better than 122-year-old Lodge Manufacturing Company, the oldest family-owned cookware company in the United States. As it tried to manage more orders for its cast-iron skillets, griddles, and other cookware than it could fill, the company added a third production line to its foundry. Even that wasn't enough to help the largest employer in South Pittsburg, Tennessee, keep up with demand.

That's when Lodge decided to invest $85 million in a second foundry, a single distribution center to replace three others, and its first warehouse management system (WMS).

Business has been especially good since Lodge introduced its foundry-seasoned cookware in 2002, the first company to do so. Today, its product line includes the top-selling 12-inch and 10-inch seasoned cast-iron skillets, porcelain-enamel Dutch ovens and pans, carbon steel pans and skillets, and camp ovens. Lodge manufactures products in both the older foundry and a new, 127,000-square-foot facility that began pouring in late November 2017.

When Sam Touchstone, Lodge senior vice president of finance and administration, began the new distribution center design process, it was clear the company had to replace the paper-based system it had always used for processing orders. Sage Technologies, the company's ERP system provider, introduced Touchstone to EVS, an enterprise software company in Boulder, Colorado.

Touchstone told the EVS team in early 2017 that his goal was to transition to the new distribution center in July without any down time. That was a significant challenge considering employees would be using technology, rather than paper, to pick and fill orders in a new space with a different layout and flow.

But EVS was up to the challenge. The software company knew Lodge would need to define new warehouse processes before implementing a WMS, so it connected Touchstone with Tom French, CEO and founder of the Supply Chain Coach.

To do that, the distribution center should be set up in zones according to customer types that include online retailers, French said. In addition, to get the functionality required, the WMS would have to be disconnected from the ERP.

Coincidentally, this presented EVS with an opportunity to beta-test its new WMS, which would allow Lodge to eliminate shipping to retailer warehouses for e-commerce order fulfillment. That appealed to Lodge, but it wasn't the only software feature that made sense for the company's situation. The new mobe3 was the first iOS-based WMS, which made the user interface much more attractive to Lodge than alternatives.

"Many of our people have been with us for more than 20 years, and we would be asking them to start using an automated system instead of the paper process they knew and trusted. It was a big shift," Touchstone says. "But they're familiar with iPhones, and that made the transition to a completely new way of doing things easier than it might have been with other options."

"The workers weren't just implementing a new WMS," adds Nate Brown, chief technology officer at EVS. "Their roles and responsibilities would also change. Lodge had to re-define all the roles because the physical process was now much different."

And yet, after taking a long weekend in late June to count and slot inventory, when the new distribution center opened on Monday, orders were filled and shipped. Preparation and training had a big impact on the company's ability to minimize downtime, but so did the fact that mobe3 let Lodge simulate and test processes before the facility went live.

"We were confident the processes and rules were correct because we could simulate everything before the warehouse opened," says Evan Garber, CEO of EVS.

Still, the changes for Lodge's 30 distribution center employees extended far beyond using technology built around their institutional knowledge. The zone approach to filling orders is different, as are storage systems.

"The couple of shelves we used before have expanded to three pick aisles with our first-ever flow racks," says Teresa Baugh, distribution center manager.

New fulfillment zones are set up according to customer types and fast-sellers. For example, mixed-SKU pallets have their own zone, as do single-product pallets. There's one for fast movers and another for retailer e-commerce orders.

The new facility, processes, and equipment also allow for a much more efficient shipment weighing process.

"We had no weights or dimensions in our ERP before, so we'd have to pick and weigh each order before shrink-wrapping the pallet. Only then could clerks route the order for pickup," says Touchstone.

The WMS contains every product's package weight and dimensions. "We now know how many pallets the order will have, and what the order weighs before it's picked, so we can route it immediately," he says.

Even without factoring in increased production from the new foundry that went online almost six months after the distribution center opened, results have been transformational. They include:

With continuous improvement in mind, Lodge will soon implement a transportation management system (TMS) that will allow it to schedule pickups more efficiently.

"This will change the flow at our dock doors because we'll be able to schedule when outbound shipments get picked up instead of waiting for the customer to tell us when the truck will be here," Touchstone says. "It will give us much more predictability."

It will also allow Lodge to expand pre-paid freight to more customers. "A TMS will help us get better at pricing that so we can offer it to more of the customers that are asking for it," he says.

Show Us Your Skillets

Reflecting back on the challenges involved in making such significant changes in 2017, Touchstone is struck by how well Lodge employees adjusted to a complete overhaul of their work processes. He admits that the company's profit-sharing program helps—Lodge gives 10 percent of its pre-tax profits to employees every quarter. But it's bigger than that, he says.

"We have tremendous people," Touchstone says. "When we tell them we want to change something that will improve the process, they embrace it."