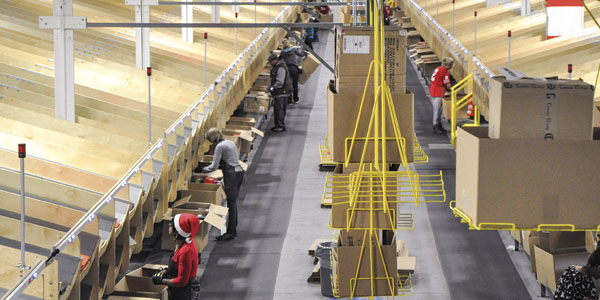 National shoe retailer DSW is well-heeled in selling name-brand shoes at a discount. As the Columbus, Ohio-based chain grew over two decades in business, it developed relationships with shoe vendors and shifted the way it bought merchandise. Those shifts led DSW to examine how it handled its inventory. Today, the company has greater control over the shoes it purchases, and is able to re-stock stores by the unit, ultimately reducing markdowns.

When DSW opened its first store in 1991, it operated as a closeout retailer. The company would buy excess merchandise at a discount from multiple shoe companies, often late in the season, then pass the savings on to customers.

"We weren't always sure exactly what sizes we were going to get," says Jeff Girard, vice president of distribution and direct fulfillment at DSW. The business model worked, but limited the way DSW replenished stock.

"We would send a store a full case of shoes in the same style and color, in multiple sizes," Girard says. "After the store sold a few pairs out of that case, we would send another case." That new case replenished the sizes sold, but also resulted in the store accumulating sizes not sold, a practice that resulted in frequent markdowns.

"We couldn't manage inventory at the size level because we never knew if we were going to have those exact sizes in our distribution center," Girard explains.

As DSW grew—today, it operates nearly 400 stores nationwide—its increasingly strong vendor relationships allowed it to buy some shoe styles earlier in the season. That shift allowed DSW to order a specific number of sizes in each style.

"Once we had that ability, we identified an opportunity," Girard says. If a store sold sizes eight, nine, and 11 out of one carton, DSW wanted to try replenishing only those sizes, instead of sending a full case that also contained unsold sixes and sevens.

This new replenishment strategy required that DSW fundamentally change how it handled merchandise in its Columbus DC. Never before had the company sorted shoes on the unit level, but the opportunity was too attractive to pass up.

Trying on a New Method

In fall 2009, DSW tested the new replenishment method with a few stores and SKUs. "The trial was small in scale, but successful," Girard says. "So we decided to roll it out fully in 2010."

At first, DSW processed merchandise manually. Throughout the DC, workers organized racks fitted with plywood shelves. On the shelves, they placed empty cartons, each representing one store. When workers sorted waves of merchandise, they took a case of shoes to the racks, packed the needed sizes into the appropriate store's box, and retained the extra shoes in a designated residual area. Once a store's carton was filled, workers would tape it up, palletize the cartons that were ready for shipment, and transport them by forklift to a conveyor belt.

DSW started with one line to accommodate the one million units estimated to ship, and ended up with three lines. Each unit represents one pair of shoes.

"We wound up handling 4.3 million units," Girard recalls. "It put a real strain on the DC because the facility wasn't set up to handle that volume." DSW realized the manual system would max out at around five million units, so it needed to automate.

After issuing a request for proposal, DSW selected Beumer Group—a distribution equipment manufacturer with U.S. offices in New Jersey—to design and install the system. Although Beumer had not previously worked with DSW, it had completed automation projects for several footwear manufacturers.

"DSW had a basic idea of what it wanted to accomplish in terms of the number of daily orders it could ship out of the DC," says Lance Anderson, Beumer's director of sales, sortation, and distribution. "But because the facility had zero automation, the company didn't know how to conceptualize, design, and fit the automated system into the existing operation to make its goals a reality."

The two companies began working together in fall 2011, and the new system was operating by December 2012. DSW installed a BS-7 belt tray unit sorter, which carries products through the packing area on a conveyor belt. Individual segments on the belt discharge product into designated chutes. Where the manual system featured a carton for every store, the automated system instead provides chutes for each store.

Space constraints complicated the installation. DSW's World War II-era facility was originally used to build military aircraft, not distribute shoes. DSW installed the equipment in a 1,400-foot by 100-foot mezzanine, which required shrinking the equipment by 40 percent while maintaining the same output.

"We designed our way around bathrooms, pipes, and columns," Anderson recalls. "It was a challenge to fit it in." Accommodations included designing the sorter so it had chutes on three legs, instead of the standard four.

After the new system was installed, Beumer conducted a standard two-week training program for DSW employees. "It's a challenge to retrain existing employees, who essentially have to learn entirely new jobs," Anderson says. "It's much harder than training new employees."

After it selected the equipment, DSW's next task was to identify the best processes to feed the sorter.

Before the automation, "most of the boxes were being crossdocked, which led to a lack of organized storage," Anderson says. Today, DSW must store the product SKU by SKU, and pick merchandise daily to feed the sorter in the correct sequence.

"We spent months locked in rooms talking about the flow," Girard says. "A sortation system only works if you keep it fed all the time. If you don't keep merchandise flowing into it, you lose productivity because workers don't have anything to pack."

DSW also wanted to pack merchandise in a way that simplified stocking for in-store associates. Ultimately, the company devised a system that involved identifying 10 product categories—such as men's formal and women's casual—and establishing a series of staging areas.

When the company runs a wave for men's formal, for example, workers place a pallet of that category of shoes into a staging area. The warehouse control system then assigns a color, say blue, to that category, and a blue light turns on.

After the first area fills, overflow moves in a second area, and another blue light blinks on. Workers picking product know they can stock pallets of men's formal in the areas illuminated by blue lights. Meanwhile, women's casual might receive a yellow light.

"That system enables the staging of multiple categories at the same time," Girard says. "When I'm ready for men's formal, for instance, the person controlling the sorter hits a button, and all the blue lights go on." Workers proceed to the blue lights to pick merchandise, then head to the sorter.

In a decasing area, DSW workers remove four or five units at a time from a box, and lay them on a conveyor belt that automatically aligns the boxes. The belt feeds the boxes to automatic cross-loading inductions that place the items accurately on the sorter. The sorter then delivers the individual boxes to a chute with an order requiring that SKU.

DSW's stores share similar layouts: men's dress on the far left, followed to the right by men's casual, men's athletic, women's athletic, and so on. To minimize transportation costs, the last few men's dress cartons include a few units of men's casual. "That's OK because those products are right next to each other in the store," Girard says. "That enables us to fill every case, so we don't have to shut down the sorter from one category to the next. It also minimizes the time store associates spend jumping around between categories."

Another customization DSW needed in its automation system was driven by the assortment of box sizes. Because it ships products manufactured by multiple companies, DSW has no control over box size. Shoes also differ dramatically in size—from narrow boxes for women's high heels to 27-inch-long boxes holding tall boots.

A standard chute would have resulted in lids popping off boxes and possible damage, which generated two concerns. First, DSW displays all its boxes on store floors. Damaged boxes could create the impression that the shoes inside fall short of quality standards. Second, chutes that cause box lids to go flying would require DC employees to chase them down, negating any productivity improvements the automated system might bring.

To make sure the equipment could gracefully handle the wide range of box sizes, DSW representatives traveled to Beumer's factory in Germany to work with engineers designing the chutes. The result was double-level, half-pipe chutes, with a special lip on the end that allows workers to easily slide boxes out from the chutes while protecting merchandise.

"Having 20 or 30 boxes lined up in a chute puts a lot of pressure on the front box," Anderson says. "It's actually hard to pick up." Adding a lip at the end of the chute addresses that issue.

Once the system was ready for action, DSW waited until a slow time in its production cycle to flip the switch. "Timing is key to a successful implementation," Anderson notes. "Don't start a new system two weeks before Black Friday, and hope it works."

DSW opted for a December start date, after all its merchandise had shipped for winter. "We expected to have a ramp-up period until August, where we wouldn't hit full business productivity because we knew we'd have to work all the bugs out," Girard says. "But we were up to speed by April 1."

Changes in the replenishment system and the move to automation have resulted in significant cost and productivity improvements. Productivity, measured in units per hour, has increased by 120 percent, Girard says.

Although switching to a unit-based model of handling merchandise increased DC operating expenses, the automated sortation system reduced costs by more than half when compared to manually sorting product. The new equipment can handle up to 25 million units annually—a 500-percent increase over the manual method. And although DSW currently uses the equipment for shoes only, the sorter can also handle accessories, such as handbags, which the chain also sells.

These changes have helped to establish DSW as the go-to store for shoes, enhancing its brand value by increasing in-stock rates. In the past, Girard heard anecdotally from friends and family: "You always have great products, but you just don't have my size."

"The automated system and new replenishment strategy have gone a long way toward fixing that," Girard says.