Maritime Logistics: Water Ya Gonna Do? 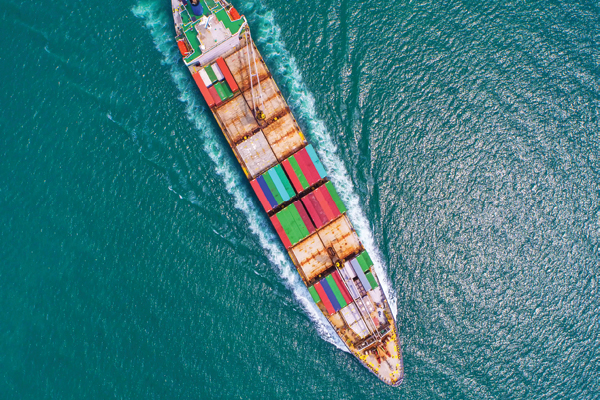 2020 created some choppy conditions for the maritime industry. But increasing volumes and new strategies and technologies point to a ship-shape future.

The changes the maritime industry experienced in 2020 promise to shape the sector for some time to come. It started with demand plummeting in the spring, as countries around the world implemented lockdowns to halt the spread of COVID-19. Demand rebounded in late summer as consumers ramped up online shopping.

Record volumes continue, driving interest in digitization—or converting paper records to digital ones to streamline processes. Before digitization can take effect, however, the industry needs to come together on a set of standards.

The global lockdowns are prompting more organizations to consider developing regional supply chains, either to replace or supplement their global ones. Discussions of reshoring, which would also shorten supply chains, are picking up as well.

In the United States, interest in a "marine highway," or greater use of inland waterways to transport goods, is growing. This could help mitigate the truck driver shortage and reduce emissions.

Similarly, to avoid the crowding and wait times prevalent at some larger ports, some shippers are considering smaller ports they may have overlooked previously.

Together, these shifts are changing the maritime world. "Shipping is getting more dynamic," says Tray Anderson, logistics and industrial lead for the Americas with real estate firm Cushman & Wakefield.

No longer will a company make one decision about, for instance, port selection and run with it indefinitely, he says. Instead, organizations will constantly reevaluate the time, cost, and sustainability of different options to identify an optimal one for each shipment.

Early on, it looked like the pandemic was ready to decimate global shipping. One global container shipping index shows throughput dropping from 114.7 to 94.6 between January and February 2020.

That changed by late summer. Consumer demand for everything from rowing machines to video games to new furniture, particularly in Europe and North America, took off.

While the growth may moderate, it's not dissipating. "We have to get our arms around it and plan for a structural shift in the demand curve," says Sam Ruda, port director for the Port Authority of New York and New Jersey. One option: extending gate hours.

The capacity reductions were unusual. "Big carriers have traditionally chased revenue at all costs," says Joshua Brogan, vice president in the strategic operations practice of AT Kearney, a global consultancy. Historically, at least one carrier would reintroduce capacity, aiming for a bump in market share.However, the carriers held firm and rates jumped.

The clout of the shipping alliances does raise questions for the future. Together, three alliances—the 2M Alliance, Ocean Alliance, and Transport High-Efficiency (THE) Alliance—account for more than 80% of the market, S&P Global reports.

"What does the current situation bode for the limited anti-trust immunity enjoyed by carriers in many jurisdictions?" Brogan asks.

The rise in rates may also prompt the business community to rethink carrier discussion agreements. More frequent negotiations with carriers and forwarders might be a new normal.

Index-based pricing is gaining wider adoption as well. Shippers and carriers have long flirted with the idea but were hampered by a lack of fair indices on which to base their contracts. Today, more indices are available for shippers to use to manage and hedge contract rates.

The power of the pandemic to shutter, almost overnight, factories across Asia has compelled more organizations to look at shortening their supply chains by reshoring and/or organizing supply chains by region. Either could reduce the number of ocean shipments.

For instance, in December 2020, stationary-bike company Peloton announced it was acquiring Precor, a Seattle-based maker of fitness equipment. With the acquisition, Peloton said it would establish U.S. manufacturing capacity.

The pandemic isn't the only force behind this thinking. As manufacturing becomes more automated, the savings possible when producing in low-wage areas drops. Add in the time required to transport goods across oceans and the vagaries behind tariffs and trade wars, and bringing operations closer to home looks even more appealing.

Changing manufacturing locations is rarely a quick decision. "Moving to another market requires identifying new suppliers, raw material sources, and skilled employees," says Rick Gabrielson, an advisor with consulting firm New Day Advisors. Companies have to evaluate the costs and benefits, and balance both against risk.

The current focus on distribution resilience within the trucking and parcel sectors will infiltrate the ocean network during the next few years. One result might be a move toward precision scheduling to drive better performance.

A New Look at Ports and Waterways

A growing number of organizations are reconsidering their maritime strategies within North America. Some are considering smaller ports to cut their reliance on the biggest—and often most crowded—ports, Anderson says.

Walmart, for example, broke ground on a new distribution center in South Carolina in December 2020. Once operational, it's expected to boost volume at the Port of Charleston by about 5%.

Talk of a U.S. "marine highway" has also been renewed, Gabrielson says. The term refers to leveraging coastal activity, transit in the Gulf, and river systems such as the Mississippi River as part of an organization's logistics networks.

For instance, trucks might transport goods part of the way to their destination, after which they'd move over the water, before returning to trucks. Europe already does this extensively, and a more robust marine highway could help mitigate the truck driver shortage in the United States, relieve highway congestion, and reduce emissions.

In fact, the goal of the Marine Highway program within the U.S. Department of Transportation, established by the Energy Independence and Security Act of 2007, is to expand the use of America's navigable waters.

"America has a versatile and expansive network of navigable waterways, including rivers, bays, channels, coasts, the Great Lakes, open-ocean routes, and the Saint Lawrence Seaway System," but they're underused, according to the Department of Transportation, Maritime Administration. 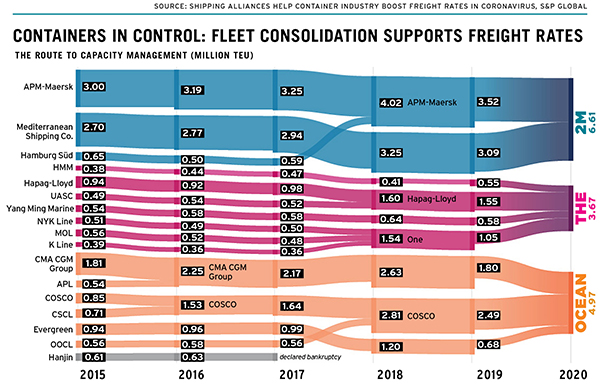 COVID-19 sent seismic waves through global trade and all the goods transported around the world on containerships. However, carriers moved quickly to remove volumes and reduce overcapacity in the face of weaker demand, which has supported freight rates throughout. This is thanks to consolidation in the carrier industry in recent years, which culminated in three key shipping alliances: the 2M Alliance, Ocean Alliance, and Transport High-Efficiency (THE) Alliance.

The pandemic helped accelerate thinking within the industry around concepts such as autonomous shipping, big data, and analytics, says Sean Maharaj, managing director in the transportation, logistics, and distribution practice with consulting firm AARete.

Going forward, technology—and particularly digitization—will be essential to the success of the maritime industry.

The ability to electronically move information between shippers, carriers, and other participants in maritime transport will unleash a "tremendous amount of efficiency in organizations," Gabrielson says.

Shippers will be able to track their products from loading at origin to a vessel's arrival. Operators at the ports, terminals, drayage firms, and warehouses will be able to plan more accurately, creating widespread efficiencies.

Before the maritime industry can leverage technology, however, it needs standards that are system agnostic and neutral. One example comes from the financial industry, which developed the SWIFT messaging network to transmit information, such as money transfer instructions, between institutions.

As ships become more connected, cybersecurity becomes a greater concern. The cost of a single cyberattack on 15 ports across the Asia-Pacific, such as a computer virus that scrambled cargo databases and disrupted operations, was estimated at about $110 billion, according to a 2019 Lloyd's report.

The Digital Container Shipping Association, along with its carrier members, is working with industry stakeholders, as well as industry and intergovernmental organizations, to establish digital standards for several initiatives that are top priorities in the coming three to five years.

These priorities include data and interfaces, the Internet of Things (IoT), electronic documentation, and cybersecurity. "Nine competitors sit down together with us to tackle industry-wide problems," says Thomas Bagge, chief executive officer and statutory director for the Digital Container Shipping Association.

The use of liquid natural gas (LNG) to fuel ships could potentially reduce carbon emissions by 15% to 30%, while cutting sulfur dioxide and particulate matter by more than 90%, according to Hapag-Lloyd. The carrier is the first to convert a large containership so it can operate on LNG or low-sulfur fuel oil (see sidebar).

Efforts are also underway to find new fuels altogether. The Hydrogen Program Plan, which the U.S. Department of Energy issued in November 2020, says "opportunities for hydrogen and hydrogen carriers are also emerging across the transportation sector, including in marine applications. The use of hydrogen in various marine vessels and at ports for drayage trucks, shore power (electricity for ships while docked), and cargo equipment all offer the potential to reduce both carbon dioxide and other emissions."

The upheaval that occurred during 2020 shows no signs of stopping and could produce a maritime industry that looks very different in a few years. Organizations that fast-track digitization efforts will gain a competitive edge, similar to what's happened in retail and other industries.

Even as advances in technology, fuel, and business practices change the maritime industry, 2020 also highlighted another enduring value: humans working together to meet challenges.

The pandemic showed the interconnectedness of all parts of the industry, says Ruda. Events at one port could impact other ports and carriers thousands of miles away. Terminals felt the effect of bottlenecks at warehouses.

Meeting these challenges requires working together. Ruda and his colleagues at the Port Authority of New York and New Jersey, along with representatives from trucking, railway, and carrier organizations, participate in several ongoing forums. These meetings accelerated from quarterly before the pandemic to weekly early in 2020, and now are held biweekly.

The discussions provide everyone with real-time updates and allow for collaboration. "We're all working together to plan ahead," as well as manage the jump in volumes, Ruda says.

The importance of stakeholders collaborating to reach a common goal isn't new. "But the pandemic brought us together even more as a port community," Ruda says.

Technological advances continue to help the maritime industry operate more sustainably. One example: Liner shipping company Hapag-Lloyd, with a fleet of 222 modern vessels and a total transport capacity of 1.6 million TEUs, is the first to convert large containerships to liquid natural gas (LNG).

Hapag-Lloyd will retrofit its 15,000-TEU ship Sajir to operate using LNG. In the future, the ship's engine system will be able to function using one of two types of fuel: LNG or low-sulfur fuel oil (LSFO).

The shipping line signed a contract for the retrofitting with Hudong HONDHOA Shipbuilding (Group). The company will carry out the conversion at Shanghai-based Huarun Dadong Dockyard.

During its time in the shipyard, the Sajir's fuel system and existing heavy fuel oil-burning engine will be converted into a dual fuel engine. The plan is to operate the vessel using LNG, but to use LSFO as a backup.

Using LNG in the shipping industry could potentially reduce carbon emissions by 15% to 30% and sulfur dioxide and particulate matter by more than 90%. The Sajir is one of the 17 vessels in Hapag-Lloyd's fleet that were originally designed to be LNG-ready; its 16 sister ships are also technically prepared for retrofitting.