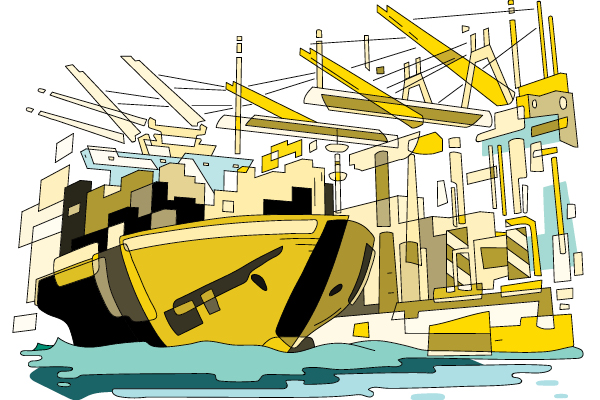 Ask a shipping professional to name alternative, lesser-known ports, and they might mention Savannah, Houston, or Philadelphia.

But ask them about Chester, Gulfport, or Tampa, and their response might be, "Hmmm…"

North America's smaller ports might not be top of mind with shippers, but they do quite well, thank you very much.

"Look at the Great Lakes ports," says Walter Kemmsies, chief strategist at Chicago-based real estate and investment management services firm JLL. "They handle some agricultural exports, but they also bring in a lot of steel."

And while the less-trafficked ports offer advantages the larger ports can't, they also have some disadvantages, such as the size of the vessels they can handle. These aren't destinations for the new 20,000 TEU ships—they're better suited to handle feeder vessels.

In the end, shippers often base port decisions on a macro view. "Where is the product being shipped from and where is the end of the supply chain? That dictates what shippers will do," says Steve Pastor, vice president of global supply chain and ports/rail logistics forcommercial real estate services firm NAI James E. Hanson in New Jersey.

Still, shippers that overlook smaller ports thinking that they extend delivery time or aren't cost effective might be surprised to learn that these ports can save time, lower costs, and provide superior customer service.

Here are seven advantages of using ports that are off the beaten water path:

Less congestion applies not only to berths, but to rail and truck access as well. "When a container comes into a large East Coast port, for example, it might sit in the container yard for two to three days, then go to a railyard and sit again," says William Friedman, president and CEO, Port of Cleveland. "But our port is fluid and cargo moves quickly."

Marine transportation is less expensive than intermodal, so the longer the freight stays on water, the more cost effective it will be. A Port of Cleveland analysis of the cost of shipping from Europe to Cleveland shows that keeping freight bound for Ohio and beyond on the water via the St. Lawrence Seaway is less expensive than a combination of marine and intermodal transportation from the coast (see sidebar).

3. Smaller ports can contribute to shipper and carrier sustainability goals.

Transporting freight by water is an environmentally friendly alternative to intermodal transport. "It's not only more cost effective to keep cargo on the water longer, it also reduces greenhouse gas emissions and congestion on highways," says Ian Hamilton, president and CEO of Canada's Hamilton-Oshawa Port Authority.

"By using a smaller port, it's easier for me as a customs broker to make sure I'm talking to the correct person," says Gretchen Blough, LCB customs brokerage manager at third-party logistics provider Logistics Plus Customs Broker Solutions in Erie, Pennsylvania.

"Dealing with a larger port is like calling any big company—you get put in an option menu," Blough adds. "Smaller ports tend to answer the phone directly, which means problems are solved without delay and freight moves more quickly."

5. Smaller ports welcome ships being crowded out of larger ports.

As ships steaming into larger ports increase in size, smaller ships get nudged aside. "Look at the major airports as an example," says Kemmsies. "Smaller airplanes will always fly into them, but fewer are doing so. They're going to smaller airports instead."

Lesser-known ports are also an alternative for ships re-routed because of extreme weather or labor strikes.

While these ports can't handle the volume that moves through Long Beach, Norfolk, or Miami, they're an essential part of many supply chains.

"As the world continues to globalize, there will be demand for narrowly focused ports," says Kemmsies. "Just because it's not the Port of Los Angeles doesn't mean a smaller port doesn't serve an important purpose."

"We can give more attention to each shipper and shipment and work closely with the terminal operator," says Friedman.

"Cleveland has a strong sense of customer service," Blough adds. "That's the kind of attention you want."

7. Smaller ports can be more flexible.

While the Port of Cleveland is primarily a bulk and project cargo port, in 2014 it floated into the container cargo business when it launched the Cleveland-Europe Express with vessel partner the Spliethoff Group of the Netherlands.

The Cleveland-Europe Express is the only direct, scheduled vessel service that moves containerized and non-containerized cargo between the Great Lakes and Europe. Through the Port of Antwerp, the freight has connections to Russia, Finland, Spain, the United Kingdom, and the Baltic states.During the three winter months in which the St. Lawrence Seaway is closed, vessels are re-routed to East Coast ports.

Express cargo coming from Northern Europe tends to be for the industrial market—machine parts and tools plus chemicals. "Manufacturers in Ohio may have a plant in Germany, Northern France, or in the U.K.," explains William Friedman, president and CEO, Port of Cleveland.

After almost six years, Port of Cleveland is seeing "a modest increase" in containerized freight. "We're handling around 5,000 TEUs annually, which isn't bad," says Friedman. "We've studied the market extensively and know that if we could capture the segment that's available to us, that could be 75,000 or 100,000 TEUs down the road."

What's Port of Cleveland's strategy for expanding its share of containerized cargo? "We've done an analysis that shows that carriers can get to and from origin and destination door-to-door for less money," he says.

The key, he points out, is door-to-door cost, not port-to-port. While the cost per container for the ocean portion of the journey is more expensive because the vessels are smaller, moving down the St. Lawrence Seaway to Cleveland eliminates the more costly and less environmentally friendly intermodal leg inland from an East Coast port.

The challenge, he adds, is that the St. Lawrence Seaway closes during the winter because of ice. "With global warming, it might be open longer," he adds.

Friedman believes that shifting some infrastructure spending to the Seaway could help reduce the winter weather issue. Citing the $1.7 billion spent to raise the Bayonne Bridge's roadway for the world's largest container ships, he notes, "For a tiny fraction of that amount, we could make improvements on the Seaway to keep it open longer."

Friedman is optimistic that more shippers will see the value Cleveland offers despite current practices.

"What we're proposing to carriers is a disruptive business model, but the freight transportation industry is one that's waiting to be disrupted," he says.

If there's no water, is there a port? Turns out there is. Several waterless, intermodal "inland ports" located far from oceans and seas help reduce over-the-road traffic by moving it to eco-friendly and cost-efficient rail.

Construction of the Central New York Inland Port in Syracuse began in fall 2019 with a summer 2020 targeted completion date. The New York State Department of Transportation has committed $21 million to expand the existing CSX rail yard so that 30,000 containers per year can move into the region from ships at the Port of New York/New Jersey.

The Midwest Inland Port, a multimodal transportation hub midway between Chicago and St. Louis, offers users domestic and international flexibility by connecting the Midwest to the East, West, and Gulf Coasts. It gives shippersless-congested access to one of the country's heaviest trucking and railway traffic flows that includes four rail networks. The port's airport has a U.S. customs office, a fixed-based operator, and runways capable of handling large aircraft.

The Logistics Park Kansas City, southwest of the metropolitan area, is a distribution and warehouse development served by BNSF Railway. The park has more than 7 million square feet of new distribution facilities and capacity for 17 million square feet total. BNSF's only full-service logistics park in the country, the development offers domestic container and trailer intermodal service, international container intermodal service, and direct-rail/carload service.